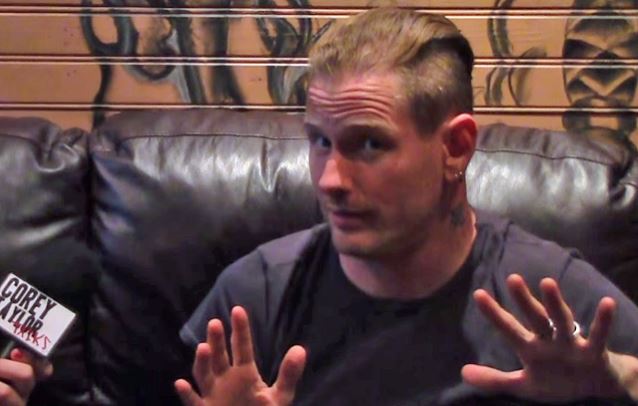 SLIPKNOT and STONE SOUR singer Corey Taylor was interviewed for the latest installment of "Corey Taylor Talks", Las Vegas's only show for teens hosted by actor and radio personality Corey Taylor (no relation). You can now watch the chat below. A couple of excerpts follow (transcribed by BLABBERMOUTH.NET).

On whether there is anyone he would still like to collaborate with:

"I've done a lot of collaborations with a lot of different people. And I think the one person, right now, just off the top of my head, that I would love to work with is Jerry Cantrell from ALICE IN CHAINS. We're really good friends. I've known those guys for quite a while, and ALICE IN CHAINS is one of my favorite bands of all time. I would love to create something cool and dark with him, and just have fun with it. So if I had a chance to, man, I would totally be down with that."

On whether he still enjoys touring or if he would prefer to do a residency of sorts and stay in one place the entire time:

"I'll tell you what… And here's the secret… and a lot of people don't know this. I love touring for the first six months. After that, it's, like… And it's not because I don't love the shows, and I don't love the travel, although the travel can kick the crap out of you. But I'm so into doing new stuff that I would rather tour for six months and go right in and make a new album and just keep writing music. 'Cause that's the one thing that I love to do. But, unfortunately, in this day and age, you have to go out and you have to tour for, like, a year and a half, just to hit all the hot spots and places like that. So I still love to tour, but, at the same time, my mind is always going a million miles an hour thinking about what's next."

Corey Taylor released his third book, "You're Making Me Hate You: A Cantankerous Look At The Common Misconception That Humans Have Any Common Sense Left", on July 7 via Da Capo Press, a member of the Perseus Books Group. The book acts as a commentary on society and pop culture and has been described as "Taylor's take on Peter Griffin's 'You Know What Really Grinds My Gears'."

Taylor promoted the book with a combination of bookstore events and a solo tour which were one-of-a-kind shows featuring readings from the book, acoustic performance, and audience discussion.