Monster Energy Carolina Rebellion presale tickets and layaway packages, as well as hotel, camping and VIP packages, are on sale now at CarolinaRebellion.com.

In 2016, Monster Energy Carolina Rebellion had another record-breaking year, so fans are encouraged to buy early and save and to be sure to secure a ticket for 2017.

The lineup for Monster Energy Carolina Rebellion is as follows:

Joe Elliott of DEF LEPPARD commented, "There are some amazing acts on Carolina Rebellion; it's a privilege to be part of what's going to be an amazing experience for all involved."

M. Shadows of AVENGED SEVENFOLD said: "We are losing our minds at the thought of bringing our new music and show to the Carolina Rebellion. The Stage has been set!"

Presale tickets and layaway packages, as well as hotel, camping and VIP packages are available for purchase now at CarolinaRebellion.com. The layaway option allows purchasers to split the cost into four monthly payments.

Those looking for an expanded festival experience are invited to purchase hotel, camping and VIP packages. Available camping options (RV and tent options for 4 nights) include the Groupie, Roadie, and Star packages. Hotel packages offered for 3 or 4 nights are: Bronze, Silver, Diamond and Platinum.

The Monster Energy Carolina Rebellion public onsale is Friday, December 9 at 10:00 a.m. EST. Beginning at that time, ticket prices will increase, so fans are encouraged to buy during the presale. At the public onsale, prices will be as follows:

As in the past, General Admission ticket discounts will also be available for active military through Monster Energy Carolina Rebellion partner GovX.

Monster Energy Carolina Rebellion is produced by Danny Wimmer Presents and AEG Live and is part of the World's Loudest Month concert series, which features the biggest names in rock music performing in eight distinct U.S. concert atmospheres in during six consecutive weekends in April, May and June of 2017. 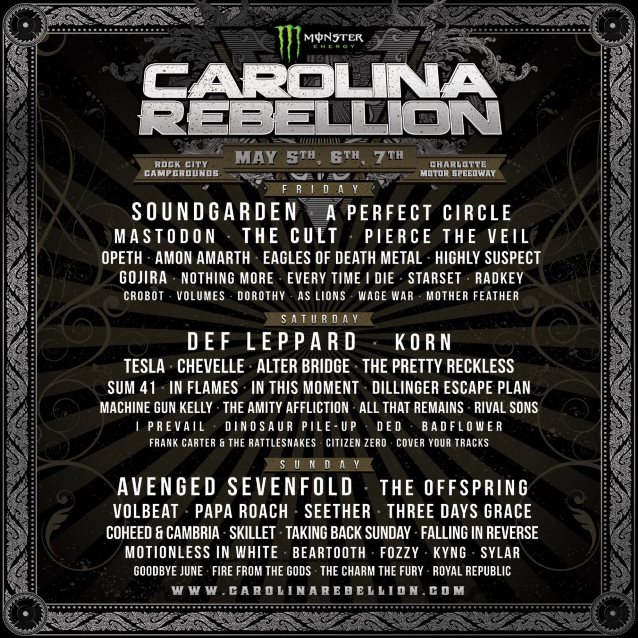