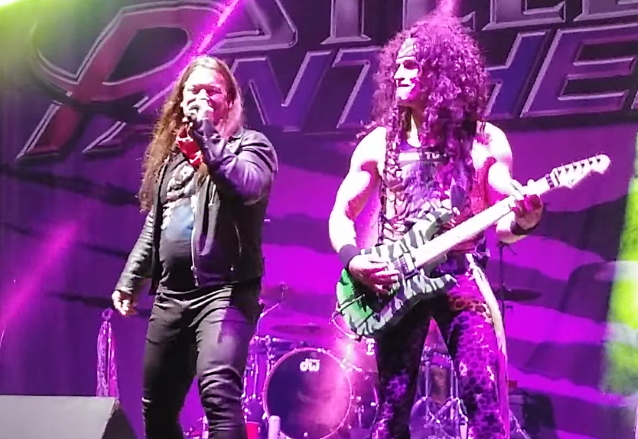 FOZZY singer Chris Jericho joined STEEL PANTHER on stage this past Friday (December 18) at Jannus Live in St Petersburg, Florida to perform the JUDAS PRIEST classic "You've Got Another Thing Comin'". Fan-filmed video footage of his appearance can be seen below.

Jannus Live was the second of three shows STEEL PANTHER is scheduled to play in Florida this weekend, with support from BLACK STONE CHERRY.

Florida governor Ron DeSantis has consistently downplayed the severity of the coronavirus pandemic and has continued to ban cities and counties from enforcing mask mandates or setting stricter capacity limits on businesses and restaurants.

According to CNN, more than 1.1 million Floridians have tested positive for COVID-19 so far, about 5% of the state's population. Florida is the 26th highest state by per capita confirmed cases.

Earlier in the month, STEEL PANTHER guitarist Satchel (a.k.a. Russ Parrish) lamented the devastating impact the pandemic has had on the music industry, with canceled concerts, tours and music festivals, all leaving hundreds of thousands of crew members out of work.

"It sucks when the government shuts everything down completely and you're at the whim of politicians," the guitarist told Metal Matt in an interview. "'Cause, basically, our industry, the music industry, is done until people deem it okay to do that again, which sucks for musicians. It sucks for fans, but it really sucks more for the musicians, 'cause a lot of people make their living in the music business. And all these major venues are gone.

"Don't get me wrong — I don't feel bad for [concert giant] Live Nation," he continued. "The dude who's a billionaire who owns Live Nation, he's gonna get by. But the roadies and the people that work at the venues and pretty much all musicians at this point… Unless you're Dave Matthews and people like that who are out there going, 'Stay in your house' — those guys are all millionaires 'cause they made a lot of money during a time when you could sell records. But everybody who's a musician now who's a relatively new artist — in the last 20 years, I mean — most of them, besides Britney Spears and Justin Bieber, are touring musicians, and they go out and make money by rocking. When the venues are closed, and they're gonna be closed indefinitely, that means that you have to do something else. And most people don't know how to do anything else, 'cause we're musicians — we're not very smart."

Just a few days earlier, STEEL PANTHER was forced to amend its virtual concert plans due to a rise in COVID-19 cases throughout the United States. The band also released a re-worked version of its song "Fuck Everybody", from STEEL PANTHER's latest album "Heavy Metal Rules", now re-titled "Fuck 2020". The newly recorded version includes updated verses that reflect the insanity of this year.

"Heavy Metal Rules" was released in September 2019. The disc, which is described in a press release as a "heavy metal version of a self-help manual and ultimate party album combined," was once again produced by Jay Ruston, who collaborated with the band on all of its previous recordings, including 2017's "Lower The Bar".

While you're hiding in your basement we are living life. Good luck from sunny Florida.???

@Steel_Panther Thanks for rocking out balls off last night in St Petersburg! And YES! You guys should move to St Petersburg.#fuckcalifornia pic.twitter.com/YVOiUctJOv

You do understand I was at a sold out concert in the great state of Florida right? Apparently our elected governor is not buying it.

@Steel_Panther can’t believe you guys played a show. IN FLORIDA.... DURING A PANDEMIC!! So Fucking disturbing, gross, selfish, stupid, reckless, ignorant and disrespectful. Terrible music aside... this is a pure SCUMBAG move.

Look, if I’m going to risk getting Covid, it’s not going to be for Steel Panther. Not sure how they got away with having such a large event regardless of it being outdoors. You might wanna hold off on travel to Florida for a while.

I have seen Steel Panther multiple times. I love them. They’re outstanding. I live in Orlando. I didn’t go. Not all people in Florida are idiots. Just saying. There are dipshits EVERYWHERE. 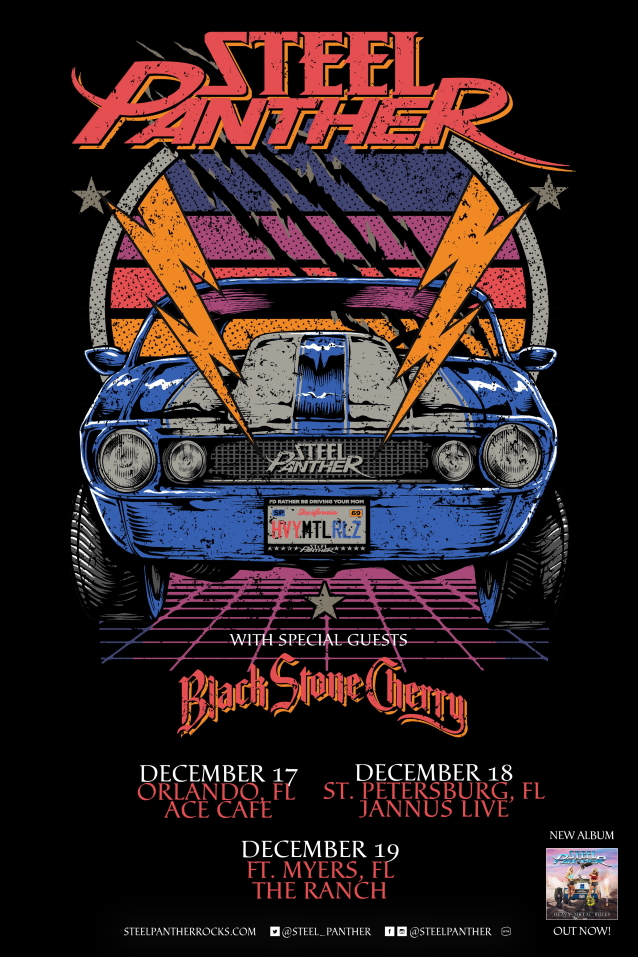