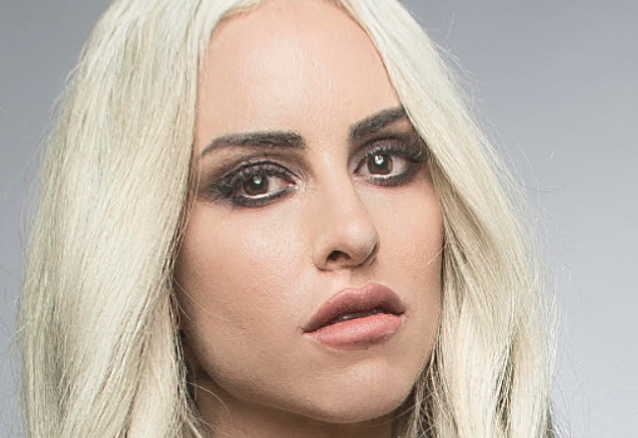 STITCHED UP HEART singer Alecia "Mixi" Demner spoke to Anne Erickson of Audio Ink Radio about her experience as a woman fronting a metal band.

She continued: "There's definitely more judgment, I feel like, for women. If it's a bunch of guys in the band, they go up, they play the show. There isn't so much critique and you don't have to prove yourself as much, I feel like, when you're male.

"The female vocal has a different sound than the male vocal, so over rock music, it can sometimes sound more poppy and sometimes deter the listener, but also there's people that like the female vocal over the male vocal, because the male is always gonna sound stronger and harder, because that's the voice that they have," Demner added. "But I do feel like being a woman, you do capture a little more attention. But that attention also comes with a lot more judgment and critique, I think, as well."

Mixi went on to say that she and her bandmates have been using the coronavirus downtime to get creative on new music.

"Merritt [Goodwin, guitar] has written seven instrumental tracks," she said. "I haven't tracked all the vocals on 'em all yet, because we've been so busy with the whole Twitch streaming stuff. I'm sure that a lot of lyrics are coming out somewhat… I sing from the present moment and what's happening, and I think a lot of the new music that's coming out is gonna have the elements of what we're all going through in it. So, I think there's just gonna be — in this, there's gonna be a lot of that. And then there's a couple of other things in the works with some other producers that we've been collaborating with, and some other artists as well. I love the whole collaboration aspect of things. I really like working with other singers, especially, on stuff. I think it adds another dynamic — especially a male vocal with a female vocal. I really like the contrast, personally. So, we're working on some collaborations and stuff, as well as just writing some new stuff, and getting started a little early for the next record."

STITCHED UP HEART's latest album, "Darkness", was released in March via Another Century. The LP was produced by FROM FIRST TO LAST singer/guitarist Matt Good (producer of ASKING ALEXANDRIA and HOLLYWOOD UNDEAD).