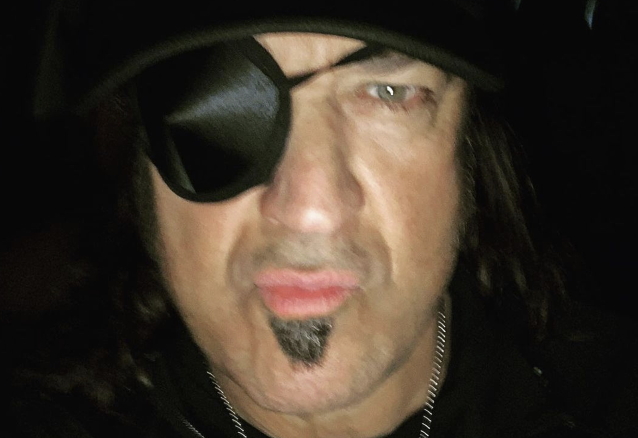 STRYPER frontman Michael Sweet will undergo emergency surgery on his right eye for a detached retina.

Sweet shared the news of his diagnosis in an Instagram post on Friday (November 19). The 58-year-old vocalist/guitarist wrote: "I just saw the eye doctor and I have a detached retina. I'll need emergency surgery (vitrectomy) on my right eye. A lot of time has passed (long story and many details) so I may or may not have normal vision restored. I'm believing that it will be and I of course welcome all the prayers I can get. My left eye (good eye) has an old retinal tear and will require laser (in office) to repair. It's susceptible to retina detachment as well. I'll be down for the count for 2 weeks (laying face down so the bubble they place in my eye can stay in place) and I'm guessing that'll be the toughest part of all this. Doctor said this is hereditary."

Sweet added that his annual Christmas solo show, which was scheduled to take place this year on December 3 in Plymouth, Massachusetts, has been canceled. Tickets will be honored at next year's gig, which is set for December 10, 2022.

"My sincere apologies as it breaks my heart to cancel any show or event," he said. "I love you all and I deeply appreciate all the concern, thoughts and prayers".

Michael's medical emergency comes months after STRYPER guitarist Oz Fox underwent the first of his brain surgeries to treat one of the tumors that were found in his head three years ago. As a result, Oz has been sitting out the band's recent tour dates and was temporarily replaced by Howie Simon (JEFF SCOTT SOTO, GRAHAM BONNET).

In early August, Oz said that he felt "it would be best" for him to take the rest of the year off from touring "for some solid recovery time" following surgery.

Fox's tumors — one by his ear and the other in the back of his brain — were discovered when he suffered his first seizure in August 2018 while performing with SIN CITY SINNERS at Harrah's in Las Vegas.

In October 2020, Fox was briefly hospitalized after suffering another massive seizure.

Within weeks of Fox's original August 2018 seizure, STRYPER toured Australia and Japan as a three-piece, and later recruited Simon to fill in while Fox was unable to go on the road.