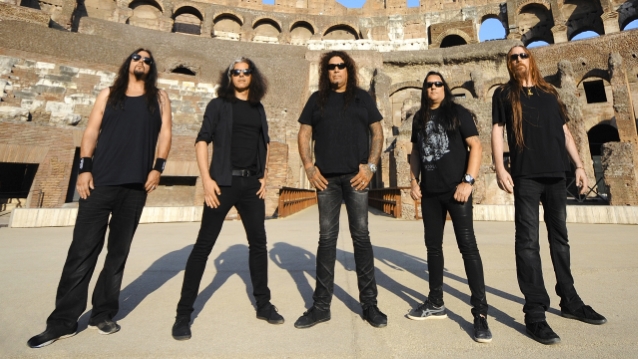 TESTAMENT has entered the studio with Juan Urteaga (MACHINE HEAD, EXODUS) to begin pre-production on the follow-up to 2016's "Brotherhood Of The Snake" album.

Guitarist Eric Peterson confirmed the band was putting the finishing touches on its new music, writing on Instagram: "It's official! We're in the studio doing pre-production for new record. I think it's gonna be a monster record now that it's all coming together."

Added bassist Steve DiGiorgio: "PreProduction time. Commencement of #Testament new album. In the studio with Juan, @ericpetersonofficial and @therealgenehoglan working out what will be the new songs. Heavy!"

Peterson said in an interview with Guitar World that he hoped TESTAMENT's next album would be a more collaborative effort than "Brotherhood Of The Snake", which saw him writing all the music in about three months and then e-mailing the songs to his bandmates.

For his part, guitarist Alex Skolnick told Heavy New York that TESTAMENT's new studio album, which is tentatively due later this year, will not necessarily sound like a direct follow-up to "Brotherhood Of The Snake".

"I think anytime we make a record, we don't think about the last record," he said. "That's done. Actually, the last thing we wanna be influenced by is the previous record. And I think it's pretty safe to say there's never been two records in a row where they're really that much alike. We don't have a 'period.' Sometimes bands release a pair or a series of records where there's a big similarity. We've never done that. So I think it's gonna be starting fresh. And we'll see where it goes… It's not pre-planned."

Last September, singer Chuck Billy told Inquisitr that TESTAMENT's next record would likely include a ballad. "We haven't done a ballad in 20-something years probably," he said. "I mean, a full-on ballad. 'Born In A Rut', off the other one ['Brotherhood Of The Snake'], it's soft and has melody, but it's not really a true ballad."

"Brotherhood Of The Snake" was recorded under the watchful eyes of Urteaga, Peterson and Billy and was mixed and mastered by Andy Sneap.

PreProduction time. Commencement of #Testament new album. In the studio with Juan, @ericpetersonofficial and @therealgenehoglan working out what will be the new songs. Heavy!??