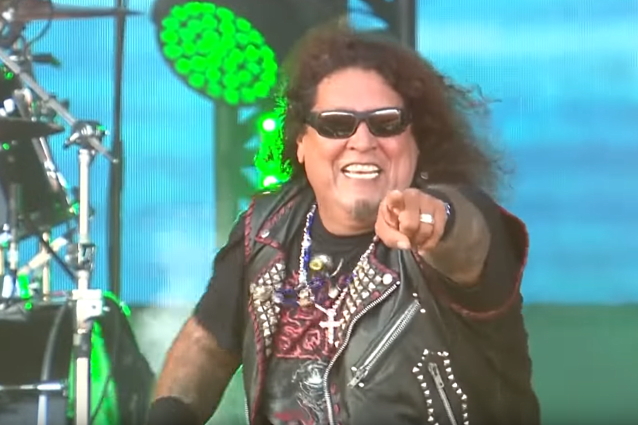 On October 10, old-school Brazilian thrash/death metal band TORTURE SQUAD played a show with Chuck Billy from TESTAMENT at one of the biggest and most popular festivals in the world, Rock In Rio. The fourth day of the festival was the "Metal Day" and was the only day the festival was completely sold out, with more than 120,000 fans in attendance.

Singer Mayara Puertas said: "It was a very special moment in our career, and was a huge pleasure to share the stage with Chuck, who is an influence for the band."

This epic show took place on the Sunset Stage, alongside bands like NERVOSA, CLAUSTROFOBIA, ANTHRAX and SLAYER.

TORTURE SQUAD opened the set with its new single, "Blood Sacrifice", while a dancer with her body painted in blue made a representation of Hindu goddess Makali, who inspired the song's lyrics. That was soon followed by TORTURE SQUAD's classics "Raise Your Horns" and "Horror And Torture".

After that, they called in Billy and CLAUSTROFOBIA to play TESTAMENT's classics "Disciples Of The Watch", "Practice What You Preach" and "Electric Crown", with around 60,000 people singing along.

TORTURE SQUAD released recently a split with LIVING METAL. Now the band is writing a new album and preparing a big tour in Europe for next year.