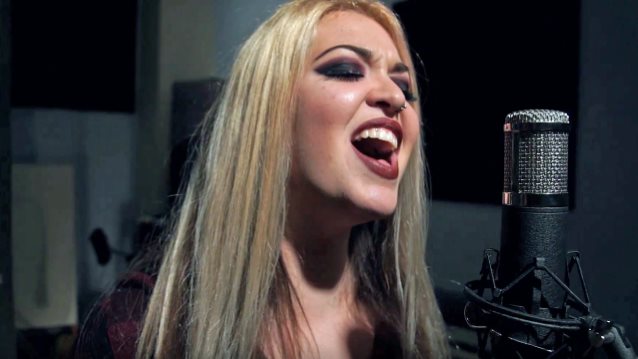 Montreal, Quebec, Canada-based melodic death metallers THE AGONIST have released a video for their cover version of the chart-topping HOZIER single "Take Me To Church". Check it out below.

THE AGONIST's rendition of "Take Me To Church" is featured as a bonus track on the band's latest album, "Five", which was released on September 30 via Napalm Records. The CD was recorded with producer Mike Plotnikoff, who has previously worked with BUCKCHERRY, OTEP, HALESTORM, DROWNING POOL, THEORY OF A DEADMAN, 3 DOORS DOWN, FEAR FACTORY, FLYLEAF and SKILLET, among others.

Commented THE AGONIST guitarist Danny Marino: "It was fun to record a cover of a song that is so different from our material. Even though it is not metal at all, the song itself is very dark and meaningful. That's why we felt it could be really interesting as a more upbeat AGONIST song. I'm happy that we were able to keep some elements while drastically altering others."

Marino previously stated about "Five": "This album represents another shift in the evolution of THE AGONIST!

"Vicky [Psarkis, vocals] and I went even deeper into what makes a song really connect.

"I'm very proud of everyone's hard work making this the most diverse and interesting record for us to date!

"It was a great learning experience working with Mike Plotnikoff and fully immersing ourselves in the recording process 24/7."

Psarkis added: "Being in THE AGONIST for over two years now and after releasing my debut album with the band and numerous tours, I can say that 'Five' is the record where I believe that we finally found our sound!

"There's a certain confidence that comes with experience and there's something about being fully comfortable that can take your approach towards songwriting to a whole other level.

"Working on the lyrics and vocals on this album was an incredibly natural process.

"Halfway into the pre-production, we realized that a lot of our songs seemed to be telling a story and hearing the album in its entirety is like escaping into our world."