THE DEAD DAISIES — the hard rock "collective" founded by Australian musician and businessman David Lowy — will embark on a massive European tour this spring/summer — a combination of arena and amphitheater shows with both JUDAS PRIEST and FOREIGNER, performing at some of the most famous and coveted festivals such as Graspop Metal Meeting in Belgium and Hellfest in France, as well as an exciting array of headline performances.

THE DEAD DAISIES will be touring in support of its as-yet-untitled fifth album, which was recorded at La Fabrique Studios in the south of France with producer Ben Grosse. Due in late May, the follow-up to 2018's "Burn It Down", will be the band's first to feature Glenn Hughes (DEEP PURPLE, BLACK COUNTRY COMMUNION), who joined the group last year as its new bassist and vocalist, replacing John Corabi (MÖTLEY CRÜE) and Marco Mendoza (THIN LIZZY).

* with JUDAS PRIEST
# with FOREIGNER

Last month, Aldrich told Guitar Interactive Magazine about the forthcoming album from THE DEAD DAISIES: "The new record is kick-ass. [Glenn is] on fire. It's a different sound than anything he's done, maybe, before — definitely different for me. Of course, I was sorry to see John and Marco go, but Glenn is killing it. He's a legend and he is who he is. There's a reason why he's called the 'Voice Of Rock.' He brings it every day."

Aldrich, who played guitar for Hughes's solo band on tour in Europe, South America and Japan prior to joining THE DEAD DAISIES, said that it was "amazing" to reconnect with Glenn. "We were talking about doing some recording together maybe at some point; it just never happened," the guitarist said. "He got in the Rock And Roll Hall Of Fame, and then he got so busy with his 'Hughes Plays Deep Purple' [tour], [and] I was busy with THE DAISIES. But then something happened, and John Corabi wanted to have some free time to do his own thing, and Marco too. And [Lowy and the rest of THE DEAD DAISIES camp] started talking to Glenn, and they said, 'Hey, we're talking to Glenn Hughes.' I go, 'Man, that would be amazing.'"

Hughes told "The Blairing Out With Eric Blair Show" at last month's NAMM show that THE DEAD DAISIES's new album is "a beautiful piece of music." He described the LP's musical direction as "classic rock," adding that "it's a groovy album. It's got a lot of melodies to it. It's what you can imagine with me joining them — what could have happened and what has happened. It's a very interesting piece of music."

Hughes went on to praise Lowy, saying that collaborating with THE DEAD DAISIES leader — who is also the son of billionaire Frank Lowy, the founder of one of the biggest retail groups in the world, Westfield — was a "wonderful" experience. "He's a studious guitar player," Glenn said. "He works his socks off. With Doug playing lead, David plays rhythm, it's a good combination with me playing the way I play."

According to Wikipedia, since the band's formation in 2012, THE DEAD DAISIES has featured two dozen different members (including "session" players and "temporary substitutes"), including drummer Brian Tichy (FOREIGNER, WHITESNAKE), GUNS N' ROSES guitarist Richard Fortus and GN'R keyboardist Dizzy Reed. The group has toured with the likes of AEROSMITH, KISS and BLACK STAR RIDERS.

Known as the "voice of rock," the 68-year-old Hughes is best known for fronting the Mk. III and Mk. IV lineups of DEEP PURPLE in the mid-1970s and for singing on BLACK SABBATH's 1986 album "Seventh Star". He was replaced by Ray Gillen after only six live performances with the band. 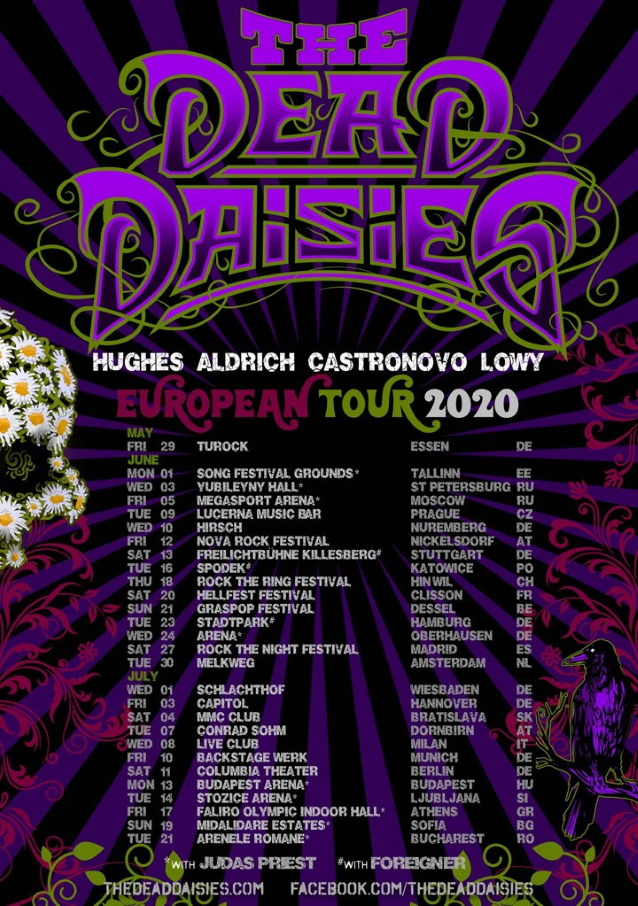