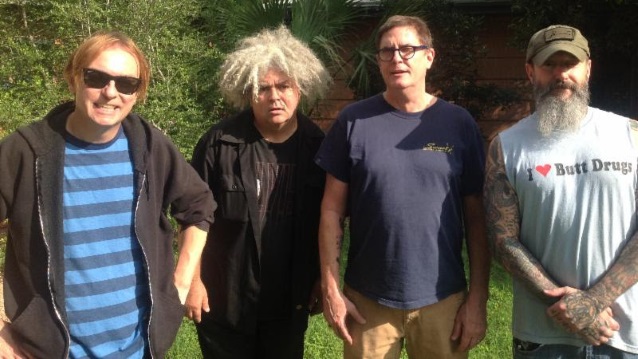 THE MELVINS return with "Hold It In", their first studio album as a quartet since 2010's "The Bride Screams Murder", on October 14. The new CD was recorded in both Los Angeles and Austin earlier this year.

"'Hold It In' is a refreshing piece of fiction in a boring world of fact and bullshit," said Osborne.

"Paul is one of the best guitar players I have ever heard and Pinkus has an outside the box type of approach to both guitar and bass that you just have to let it ride.

"It's very rare you get a chance to work with three folks from the 'Break A Wish' foundation, all at the same time," said Pinkus. "I believe they'll remember their experience with me forever (or until they finally all lose their fight with S.I.D.S)."

THE MELVINS kick off a round of U.S. tour dates on October 15 in Sacramento at Assembly, which also includes a performance at this year's Voodoo Experience in New Orleans. Osborne, Crover and Pinkus will be the touring lineup for this run of dates.