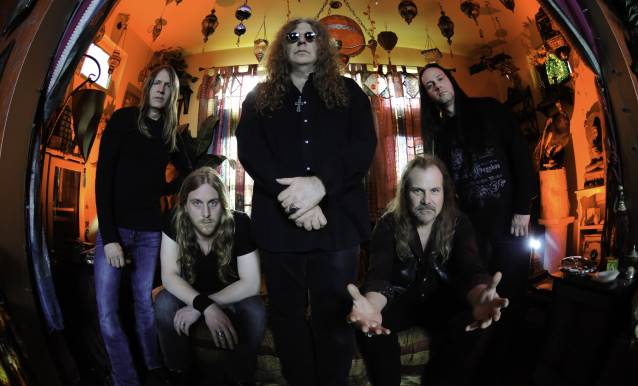 THE SKULL — the heavy doom-rock band featuring original TROUBLE members, vocalist Eric Wagner and drummer Jeff "Oly" Olson, alongside longtime former TROUBLE bassist Ron Holzner and SACRED DAWN guitarist Lothar Keller — has announced the addition of former PENTAGRAM guitarist Matt Goldsborough to the group's ranks. He will be taking over for Chuck Robinson, who has decided to exit the band in order to focus on "his demanding professional career," according to a press release.

Comments THE SKULL: "Timing was perfect when we met Matt and everything just seemed to fall into place at the right time when we needed a replacement.

"Matt is very laid back, has a captivating stage presence, and his riffs are electrifying! If you've ever seen him live with PENTAGRAM, you'll know what we are talking about.

"We all understand and support Chuck's decision. He is welcome on stage with us as a guest guitarist anytime, and we wish our brother well."

Matt Goldsborough is Philadelphia-based guitarist who joined PENTAGRAM in April 2013 and performed with the legendary band throughout the United States and Europe until original PENTAGRAM guitarist Victor Griffin (IN-GRAVED) decided to rejoin earlier this year.

PENTAGRAM stated in a press release last April about Goldsborough, "His style hearkens back to the very origins of heavy metal itself when heavy blues and psychedelic rock guitarists pioneered the genre in an attempt to harden rock and roll."

THE SKULL has unleashed two new singles recorded with acclaimed producer/engineer Billy Anderson (MELVINS, NEUROSIS). The "limited-edition" white vinyl replica CD featuring "Sometime Yesterday Mourning" (side A) and "The Last Judgment" (side B) was made available on April 8 via Tee Pee Records.

"Sometime Yesterday Mourning" and "The Last Judgment" can be streamed below.