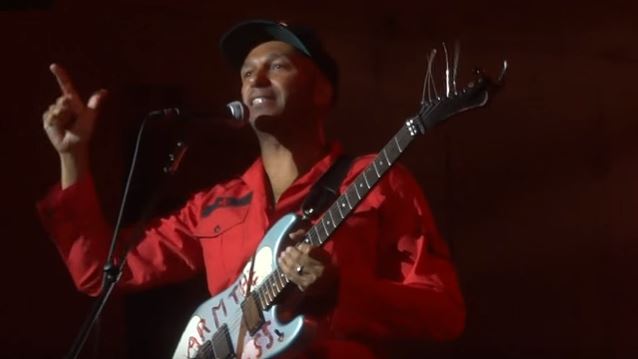 RAGE AGAINST THE MACHINE guitarist Tom Morello spoke with Maxim.com about his appearance with Ozzy Osbourne at this weekend's Voodoo Music + Arts Experience in New Orleans, anchoring a supergroup that also features Slash and original BLACK SABBATH bassist Geezer Butler. Morello said: "It's a thrill. My first-born son Rhoads Morello is named after the great [OZZY OSBOURNE guitarist] Randy Rhoads. There was a Randy Rhoads poster on my wall when I was practicing guitar eight hours a day, and he was very influential, because, while he was playing big heavy metal songs with Ozzy Osbourne, he was first and foremost a musician, and secondly a rock star, and that always appealed to me. So being able to play with Ozzy on some of Randy's songs is another check off the bucket list."

Asked if he was more into BLACK SABBATH or Ozzy's solo stuff when he was growing up, Morello said: "Both. I grew up as metal as can be in the northern suburbs of Chicago. It was all about hard rock and heavy metal. So Ozzy's solo work and SABBATH were always very high on my list. I was a huge fan of Tony Iommi's riff writing and of Randy Rhoads's extraordinary guitar playing. To be able to dust off a few of those gems and play them in front of 50,000 people is something I'm looking forward to."

On November 17, Morello will lead a group of musicians and actors during a unique event honoring the great labor songwriter Joe Hill at The Troubadour in Los Angeles. Additional artists include Joan Baez, Ziggy Marley, Rich Robinson (THE BLACK CROWES), Boots Riley, Tim Armstrong, Wayne Kramer, Van Dyke Parks, Jill Sobule and David Rovics, with more special guests to be announced. THE LAST INTERNATIONALE and BUILT FOR THE SEA, who are both signed to Morello's Firebrand Records, will play as well.

Musicians will perform songs from and inspired by Hill's extensive songbook — which features picket line and protest classics "There Is Power In A Union", "The Rebel Girl", "The Preacher And The Slave" and "Casey Jones", among many others.

Actors will read from his moving letters and poetry including from a telegram Hill wrote to "Big Bill" Haywood from his jail cell in Utah: "Don't waste time mourning. Organize!" — a line that became a slogan of the U.S. labor movement.

Hill was assassinated by a firing squad in the State of Utah a century ago, November 19, 1915.