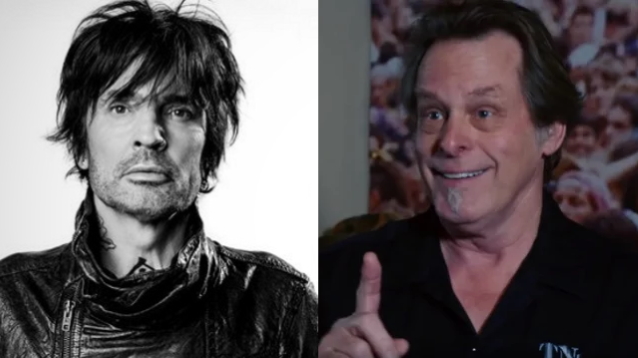 In an interview with Blunt Force Truth, Nugent discussed his recent appearance on Sammy Hagar's AXS TV reality series "Rock & Roll Road Trip With Sammy Hagar". The avid hunter said: "The producers wouldn't let [Sammy] near me, even though he and I go way back; we're dear friends. They thought I was dangerous, that I'd come out with a machine gun or I'd slaughter an innocent fawn on television. This is stupidity! I said, 'So your producers were afraid of me, but they did a show with Tommy Lee, who's a convicted felon, domestic violence heroin addict.' They're okay with this guy, but not with the Ted Nugent 'Kamp For Kids' charity, teaching kids to be clean and sober. I said, 'Sammy, coldcock those sons of bitches and get out and let's do the show.' So, finally, they dangerously acquiesced, and we did the number one Sammy Hagar 'Rock & Roll Road Trip' show."

On Wednesday night (October 14), Lee took to his Twitter to write: "Ted Nugent? ....Is that guy even still alive? ..... I thought he shot himself like 20 yrs ago". Tommy also included two middle finger emojis as well as a crying laughing emoji.

Lee was one of the featured guests in the first season of "Rock & Roll Road Trip With Sammy Hagar", which premiered in 2016.

The "Rock & Roll Road Trip With Sammy Hagar" episode featuring Nugent originally aired this past May.

Nugent is a longtime supporter of President Donald Trump, while Lee has repeatedly made his anti-Trump sentiments very clear. The MÖTLEY CRÜE drummer even said in a recent interview that he would leave the United States if Trump wins re-election.

Back in 1998, Lee was arrested for spousal battery and he served six months in jail after pleading no contest to assaulting his then-wife Pamela Anderson.