Iconic band TOOL will bring its unparalleled sonic and visual experience to Glen Helen Amphitheater in Southern California with PRIMUS, a "special" guest to be announced, MELVINS, and DJ sets by THE CRYSTAL METHOD on Saturday, June 24.

This is a unique opportunity to experience live performances by some of the most highly acclaimed artists beneath the picturesque San Bernardino Mountains in Devore, California, just outside Los Angeles.

Tickets for the show — which is produced by Danny Wimmer Presents and Live Nation Los Angeles — go on sale Thursday, April 13 at 10:00 a.m. PT at Ticketmaster.com.

TOOL's summer North American tour kicks off on May 24 in Fairfax, Virginia and will include several festival stops in addition to headlining dates.

TOOL bassist Justin Chancellor told Bass Player in a recent interview that the band is "pretty deep into the writing process now" for the long-awaited follow-up to 2006's "10,000 Days" album.

TOOL singer Maynard James Keenan has been touring with his other act, PUSCIFER, and has been on a book tour in recent weeks to promote his newly released memoir, "A Perfect Union Of Contrary Things". He is also playing a number of shows with A PERFECT CIRCLE this spring. 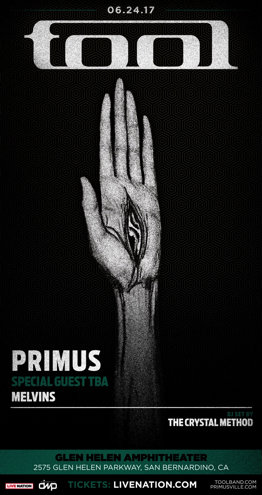