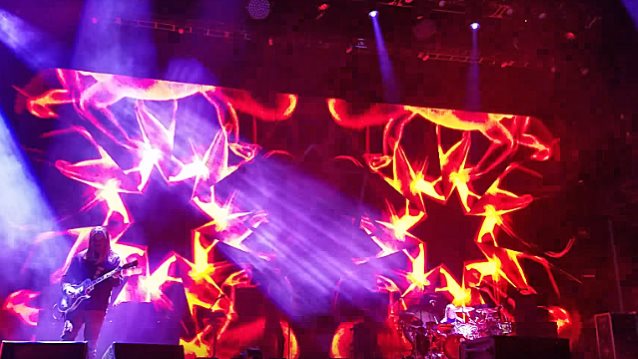 TOOL frontman Maynard James Keenan had some choice, if unusual, words for the crowd at the Boston Calling festival on Sunday night (May 28), when the band headlined the final night of the event. According to The Pulse Of Radio, Keenan said (see video below): "As artists, we interpret and report, that's our job. We are merchants of emotion. We have the privilege to do that because of active and former law enforcement and military defending our right to do so."

He continued: "Those of you who are law enforcement and military, your job is to defend our right to act like whiny, entitled snowflake assholes. Myself being one. Snowflakes, your job is to respect them fucking doing that for you. Divided we fall. Don't believe the hype, dumb-dumbs. We're all in this together."

Keenan did not elaborate further on his comments.

The Boston Calling show was the fourth of TOOL's current tour and marked the band's first show in the Boston area in more than a decade. The tour will also bring the act to New York City next weekend for the Governor's Ball and its first show in that city since 2006.

TOOL's tour continues in Rochester, New York on Tuesday (May 30). The trek will wrap up with a large show in San Bernardino, California on June 24 which will also feature MELVINS, PRIMUS, THE CRYSTAL METHOD and more.

Although there have been more hints than usual lately that we might be closer to the first new TOOL album since 2006, there has been no concrete evidence of a release date yet.