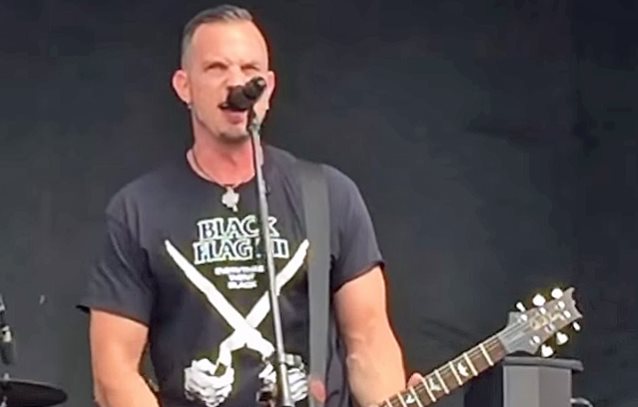 Kristyn Clark of Pop Culture Madness conducted an interview with TREMONTI, the band led by CREED and ALTER BRIDGE guitarist Mark Tremonti, at the fifth annual Monster Energy Carolina Rebellion, which took place May 2-3 at Rock City Campgrounds at Charlotte Motor Speedway just outside Charlotte, North Carolina. You can now watch the chat below.

Speaking about the response to TREMONTI's forthcoming second album, "Cauterize", Mark said: "It's been the best feedback I've ever gotten on the solo stuff. I went over to Europe to do a press tour, and everybody who's heard the record were just so complimentary and… I think, as a band, we try to… The only goal we have in the studio is to make it sound better than the last record, and everybody is… The unanimous decision is that it's better than the last record so far."

"Cauterize" will be released on June 9 via Fret12. The follow-up to 2012's "All I Was" was helmed by producer Michael "Elvis" Baskette, who previously worked with ALTER BRIDGE and SLASH.

TREMONTI actually recorded two albums' worth of material during the "Cauterize" sessions and will release another full-length disc called "Dust" "probably within a year."

Asked if it was challenging to pick what songs would be on each disc, Tremonti replied: "Yeah, it was really tough. One of my favorite songs from all 20 songs was a song called 'Dust'. It will be the last song on the second CD, so if we release a song at a time, it will be the last song anyone will get to hear, which is tough for me."

He continued: "My brother [Dan Tremonti, who runs the Fret12 record label and manages TREMONTI] couldn't believe that I did not have it on the first CD. We both feel it has the best chorus of all the songs.

"I don't want anyone to think this CD is the 'A' sides and the second CD will be 'B' sides. That's not the case, and I want everyone to like the second CD just as much as the first one."

TREMONTI has recruited Tanner Keegan to play bass on its current tour.

It was announced in March that bassist Wolfgang Van Halen would not hit the road with TREMONTI due to commitments with his main act, VAN HALEN.