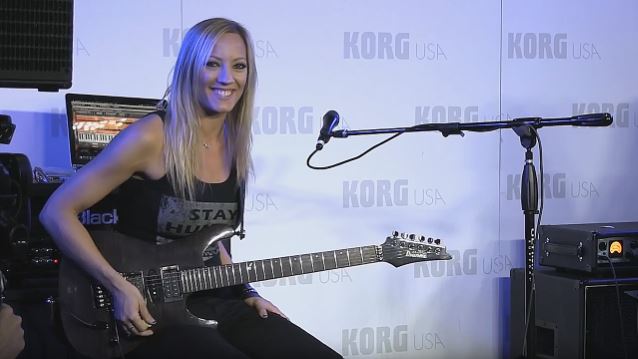 Gear Gods has uploaded video footage of ALICE COOPER guitarist Nita Strauss and bassist Chuck Garric performing at the Korg booth at this year's NAMM show in Anaheim, California. Check it out below.

Strauss is a longtime Ibanez signature series endorsee who made her name with THE IRON MAIDENS, FEMME FATALE and LA Kiss.

In a recent interview with Jim Florentine of VH1 Classic's "That Metal Show", Nita was asked whether she has ever encountered sexism, being a female in a male-dominated field. She responded: "The cool thing is, in my experience, and I feel very, very lucky to be on the scene at the time that I am now. Because it's not really weird to be a female guitar player anymore. And there was the great guitar players that came [before me], like Jennifer Batten and Lita Ford and Joan Jett and Michelle Meldrum and the guitar players that sort of blazed the trail for all of us. And they were the ones that really dealt with that stuff. They were the ones that got the 'it's weird to be a girl guitar player' and sexism."

She continued: "I can honestly say that no one has ever tried to fuck me for me to get a gig, and that's the honest truth. 'Cause it's just really about your playing now. And I think, if anything, the bar might be a little higher for a female guitar player, 'cause no one thinks you're gonna be any good. There's a lot of shit guitar players out there — girls and guys."