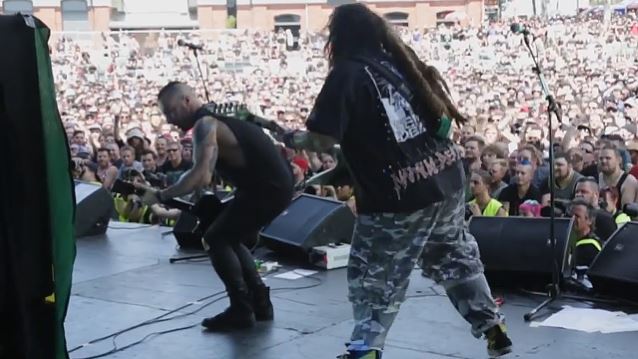 Elitch was unable to perform with KILLER BE KILLED at the event due to scheduling conflicts with his other band, ANTEMASQUE. Filling in for him is CONVERGE drummer Ben Koller.

Video footage of KILLER BE KILLED's first show can be seen below (courtesy of AndrewHaug.com).

Said Sanders after the concert (see video below): "It's very rare that you play your first show with a band. For me, my last first show with a band was 15 years ago with MASTODON. So it's a pretty rare moment. So it was a very positive anxiety. Just like, 'Okay, I wanna be good and play proper.'"

He continued: "My personal favorite moment was just the first note of the first song, looking around and seeing a bunch of my friends and idols. I grew up — before I toured and met THE DILLINGER ESCAPE PLAN and SEPULTURA — I was listening to CONVERGE, who had been our drummer today. I don't know… It's quite a pure camaraderie that organically fell into place to create what happened with my band today. So, on a personal note, it was very satisfying and just a little overwhelming. Pretty rare. Very rare."

Sanders added: "I think it went way better than you could ever expect. I don't know… We just practiced four times, and then you just jump into a scenario where there is a few thousand people in front of you. And it turned out that a lot of them were singing the lyrics and really into the tunes and knew the songs. So [it was] way better than we ever expected."

Troy also talked about how KILLER BE KILLED went from coming together to write music to actually playing a gig. He said: "There was kind of three little phases of this band, KILLER BE KILLED. The first one was the idea of all getting together and writing music. The next step was to try to get together and record music, which happened in September of 2013. We had 21 days that we were all collectively off tour together. We came together in September of 2013 and recorded a record. In 2014, it came out. So the third and final step was: 'Could you ever play a show?' We kind of discarded that. [We thought], 'We'll probably never play a show.' But this was offered to us. THE DILLINGER ESCAPE PLAN, SOULFLY and MASTODON were all off tour at the same time. We said, 'We should go for it. It's probably the first and only shows we'll ever play.' Maybe we'll play dozens more. You don't know. But we never expected to play a show. So today was very, very special. I should probably go get a tattoo of today, of what this means."

He added: "It's really rare to find a group of dudes that you just jam with for all the first reasons, as if you're 13 joining your first band. You're gonna hang out with cool people, you're gonna play music that you love, and that's it. No pressure of, 'This record's gotta be better than the next.' No, 'People are gonna think this, that.' Just get together, write some riffs. 'You like it?' 'Yes.' 'I like it?' 'Yes.' Record it. Have fun. Extremely simple. Very grass roots."

Speaking to The Metal Review about the drummer change, Puciato said: "ANTEMASQUE confirmed at the same time we did. We didn't know what day we we're going to be on, and then it just became an issue whether we wanted to still do it or not, which we obviously did. Then it was, if ANTEMASQUE have a good slot, if we have a good slot, I didn't want to shuffle the band around to a shittier time slot just to accommodate Dave playing in both bands. ANTEMASQUE for Dave is a much bigger commitment; they're playing a lot of shows all the time. If he needs to do that, that's fine with me. Ben from CONVERGE is a fucking animal, so it'll be cool to play with him."

KILLER BE KILLED's self-titled debut album sold around 5,500 copies in the United States in its first week of release to debut at position No. 58 on The Billboard 200 chart. Released on May 13, 2014 (one day earlier internationally) via Nuclear Blast Entertainment, the CD was produced and mixed by Josh Wilbur, whose credits include work with GOJIRA, LAMB OF GOD, HATEBREED, AVENGED SEVENFOLD, ESCAPE THE FATE, P!NK and STEVE EARLE. Cover art and packaging was executed by Ryan Clark of Invisible Creature Design, the Grammy-nominated design firm whose clients include ALICE IN CHAINS, FOO FIGHTERS, CHRIS CORNELL, DEVILDRIVER, MONSTER MAGNET, WOLFMOTHER and DEMON HUNTER. 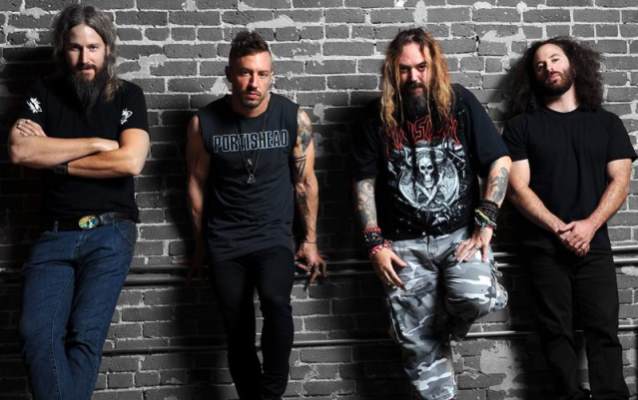