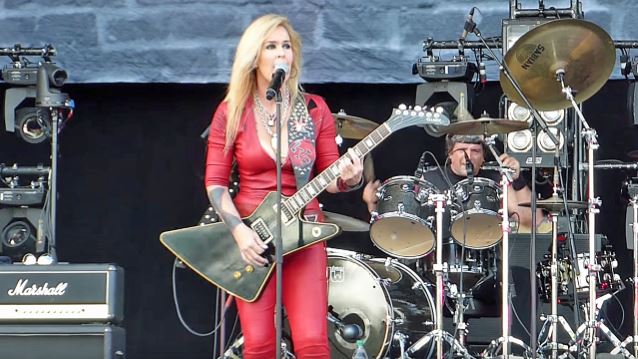 Fan-filmed video footage of Lita Ford's August 8 performance at the Heavy Montreal festival in Montreal, Quebec, Canada can be seen below.

Ford's long-awaited autobiography, "Lita Ford - Living Like A Runaway: A Memoir", is now set to arrive in March 2016 via Dey Street Books (formerly It Books), an imprint of HarperCollins Publishers. Lita told "Talking Metal" about the book: "It was a bit of a struggle at first [to write it], because I felt like people weren't understanding what I was trying to say. You know, it's a man-dominated world, and here's some girl trying to explain to them, 'This is what I did when I was 16,' and 'This is what I did when I was 21.' They just didn't seem to wrap their head around it, and it didn't work. So I went on further and looked for someone else to help me write the book. Strike number two. Writer number two didn't work out, and I finally figured, 'You know what? I'm just gonna do this myself, 'cause there's no way I'm gonna let it fall [under someone else's control].' So it's done — thank God. It's a pretty cool book. It's got a lot of ups and downs: a lot of sadness, a lot of happiness, a lot of humor… definitely a lot of sex, drugs and rock and roll. And I think people will like it."

"Coming from a teenage girl, [being in a touring rock band] takes on a whole different demeanor," Ford said. "Growing up with girls, and being with girls you don't really know… It's not like being put into a classroom where you don't really know the girls, but you're in a classroom with them. And you get to know them. You may not like them, but you're in a classroom with them, and you're stuck with them for the semester. But THE RUNAWAYS, we were just teenage girls with raging hormones."

Ford's latest studio album, "Living Like A Runaway", was released in June 2012 in North America. The effort was made available in four configurations: a double LP, limited-edition CD, standard CD and digital download. The artwork for the album was created by famed rock photographer Mark Weiss.