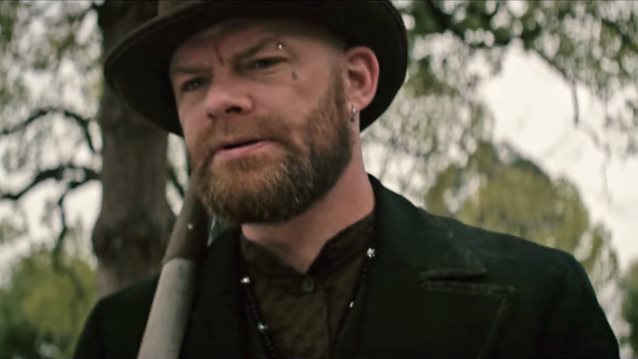 FIVE FINGER DEATH PUNCH has unveiled the video for its next single, "I Apologize". Culled from the band's sixth studio album, "Got Your Six", the chilling clip follows Ivan Moody through a cemetery housing our era's most notable deceased rock icons, ranging from Elvis Presley to Kurt Cobain and Amy Winehouse to Jimi Hendrix. The clip was shot at Los Angeles's famed Angelus Rosedale Cemetery with Nathan Cox directing the band-conceived storyline.

Said the band in a statement: "The video is a dark somber metaphor that speaks for itself. [We] don't think we need a parallel narrative to explain it or emphasize its impact as almost everyone knows someone struggling with some form of addiction. It's real for everybody.

"We have even been losing exceptionally bright, talented people who you'd assume know better.

"No matter how much support you provide, ultimately it's everyone's own decision to face their demons or perish."

"I Apologize" is the fourth single from "Got Your Six", which hit new chart heights for the band around the world following its September 2015 release.

FIVE FINGER DEATH PUNCH is working on material for the follow-up to "Got Your Six" for a tentative 2017 release.

FIVE FINGER DEATH PUNCH's first album with Rise Records, the BMG-owned rock label, will be made available following the completion of the band's obligation to its current label, Prospect Park.

FIVE FINGER DEATH PUNCH recently announced a new co-headlining arena tour with SHINEDOWN that will kick off on October 18 in Little Rock, Arkansas. Support on the trek will come from SIXX A.M. and AS LIONS.