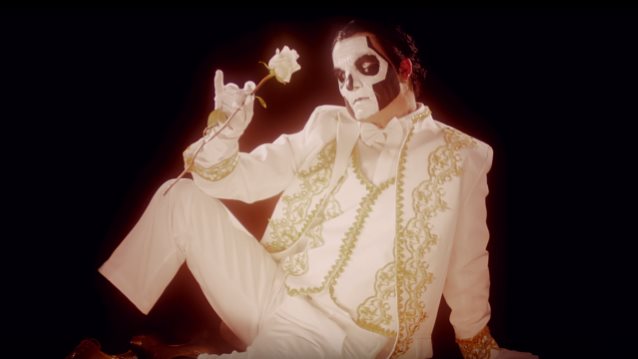 GHOST's official video for the song "He Is" can be seen below. The clip was helmed by Brooklyn-based director Zev Deans, who has previously worked with BEHEMOTH and PALLBEARER.

GHOST lead singer and founder Tobias Forge — who performs as Papa Emeritus and does the act's interviews disguised as a member of his backing band of Nameless Ghouls — recently told the Albuquerque Journal that even as he is preparing to record GHOST's fourth studio album, he's thinking about the one after that. He explained: "It's a pick and mix of a lot of different ideas and stuff laying around, a lot of new stuff being added to the pile. Yeah, it's a constant thinking ahead, and now, already now, I'm thinking about album number five, because there are songs coming out now or coming up being written that I feel like that won't fit into the new album, so I'll put that one on to the next one instead."

Forge hinted at the lyrical themes of the next record, saying: "Having in mind that the previous record was about the absence of God or the absence of deities, this new one is going to be about the return of God. You know God's wrath cast upon the suffering humans, so it will be a little bit more biblical in that sense, which in turn makes it darker, a little bit more apocalyptic, I think."

GHOST has just entered the studio to begin recording the new LP. The follow-up to 2015's "Meliora" is expected out sometime early next year.

"If everything goes to plan, by the end of the year we will have a new record recorded, mixed, mastered, delivered, and if nothing happens, we can still aim at an April release," Forge told the Dallas Observer. "The plan as of right now is to come back to America in April or May [of 2018]. We have a tendency to do American tours in April, so we like that tradition. It's a good one and we'd like to keep doing that."