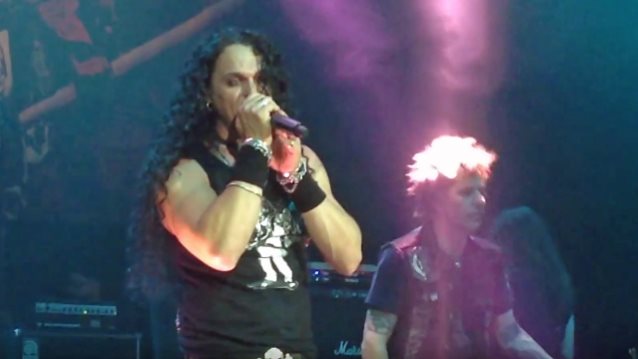 Fan-filmed video footage of SKID ROW's July 30 performance at Hard Rock Live in Biloxi, Mississippi can be seen below. Handing the vocal duties for the band once again was the South African-born, British-based singer ZP Theart (DRAGONFORCE, TANK, I AM I).

Theart's involvement with SKID ROW was exclusively reported by BLABBERMOUTH.NET on December 31, 2015.

SKID ROW has not yet officially named Theart as the permanent replacement for singer Tony Harnell (ex-TNT), who quit the band in December.

Theart's band I AM I was the support act for SKID ROW on their April 2013 tour of the United Kingdom. The trek ended in great style at a sold-out Islington Academy on April 13, 2013, with members of SKID ROW, I AM I and fellow support band BUFFALO SUMMER getting up on stage to sing the final SKID ROW song "Youth Gone Wild".

A founding member of DRAGONFORCE, Theart made four studio albums and a live record with the band and toured the world for a decade, eventually performing to audiences of up to 85,000 people. His time with the group also saw him nominated for a Grammy in 2009.

After his departure from DRAGONFORCE in 2010, ZP worked tirelessly to put together his own group and, after catefully handpicking a set of expert musicians, the result was one of the most exciting new rock bands of 2012, I AM I. A promotional single entitled "Silent Genocide" in the summer was followed by the release of a debut album, "Event Horizon", in September 2012.

Harnell announced his departure from SKID ROW on December 29, 2015, writing on his Facebook page: "I'm sorry to inform everyone that I'm no longer the lead singer for SKID ROW. I thank the fans for their love and support!" He added in a separate post a couple of hours later: "I was not fired from SKID ROW. I quit. Being ignored and disrespected isn't my thing. I had a great time performing with the band and singing so many great songs. I don't regret a thing!"

SKID ROW later said in a statement that they "found out about [Tony's] decision the same way all of [the fans] did, via his post on social media. He had posted that he was no longer in the band before informing the band personally." They added: "That being said, we are all moving forward and wish Tony the best in his future endeavors.

Harnell made his live debut with SKID ROW on May 22, 2015 at Living Sky Casino in Swift Current, Saskatchewan, Canada.

He officially joined SKID ROW in April 2015 as the replacement for Johnny Solinger, who was the band's frontman for fifteen years.