Former KISS guitarist Vinnie Vincent's previously announced shows in Memphis on December 7 and December 8 have been postponed until February 8 and February 9, 2019 in Nashville due to additional scheduling and logistical requirements by the promoter.

Promoter Derek Christopher said: "Vinnie is ready to rock and roll and is disappointed by the postponement, but we needed extra time to add and confirm additional guests for the show. We wanted to make sure it's done right."

For the February shows, Vinnie will be joined by an all-star band that will include Carmine Appice (VANILLA FUDGE, ROD STEWART, JEFF BECK, BLUE MURDER) on drums, and Tony Franklin (DAVID GILMOUR, JIMMY PAGE, THE FIRM) on bass.

Tickets can be exchanged or refunded on VinnieVincentLive.com.

Vincent — who was a member of KISS when the band publicly "unmasked" in 1983 — has made several public appearances this year after spending the past two decades out of the public eye. He recently addressed rumors about his gender identity but declined to answer the question directly, explaining that he wanted to keep a mystique about the subject. He also said that he hopes to complete his autobiography "within a year."

Vinnie joined KISS in 1982, replacing Ace Frehley. As the "Ankh Warrior," he toured with the group in support of "Creatures Of The Night", on which he played lead guitar on six songs prior to becoming an official member of the band. 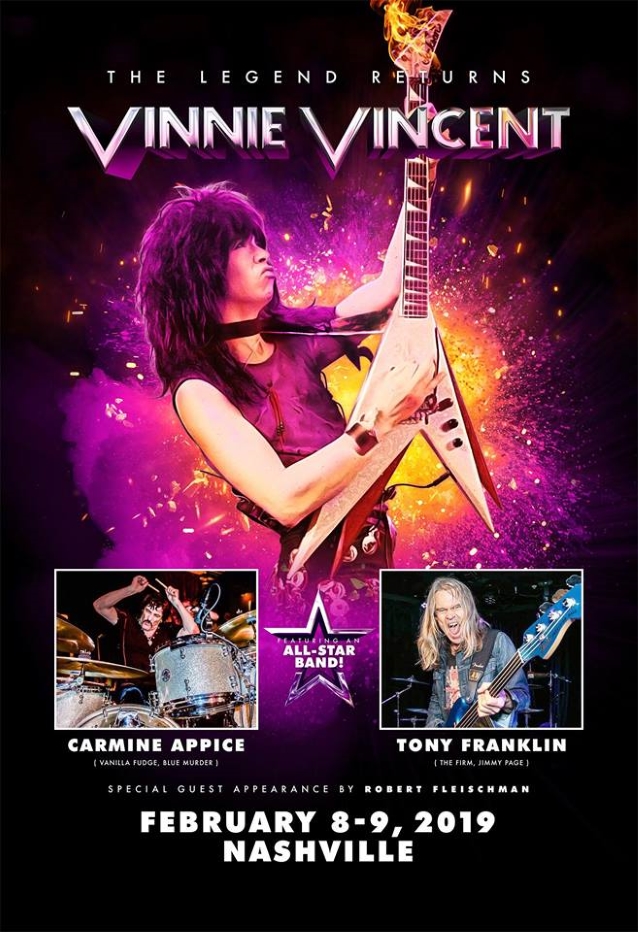