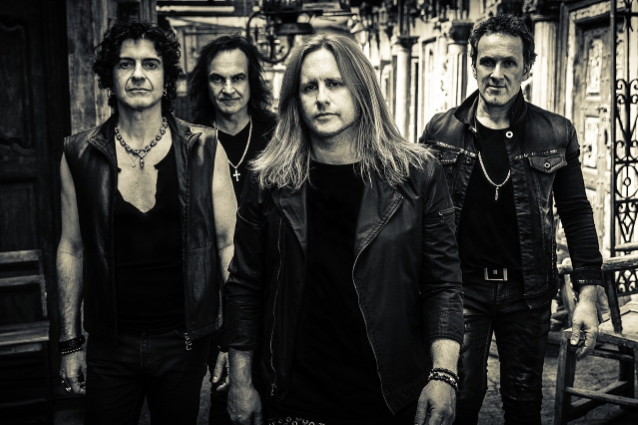 Vivian Campbell spoke to Metal Express Radio about "II", the upcoming second album from his LAST IN LINE project, which will be released on February 22, 2019 via Frontiers Music Srl. As with 2016's "Heavy Crown", the new disc was produced by DOKKEN and FOREIGNER bassist Jeff Pilson.

LAST IN LINE was formed in 2012, when Vinny Appice, Jimmy Bain and Campbell — Ronnie James Dio's co-conspirators and co-writers on the "Holy Diver", "Last In Line" and "Sacred Heart" albums — teamed up with esteemed vocalist Andrew Freeman. The debut album "Heavy Crown" was released in February 2016, landing at No. 1 on Billboard's Heatseekers chart. Initially, the release had been preceded by tragedy when bassist Jimmy Bain unexpectedly passed away at the age of 68 on January 23, 2016. LAST IN LINE, honoring what they knew would be Bain's wish to keep the band moving, brought in renowned bassist Phil Soussan (ex-OZZY OSBOURNE) and committed to sustained touring in support of the album, hitting festivals, headlining clubs, and sharing the stage with metal luminaries such as SAXON and MEGADETH.

Asked how Soussan is settling in, Campbell told Metal Express Radio: "He's fit in very well. In many ways, he's very similar to Jimmy. In other ways, he's very different. One of Jimmy's great strengths was he was a very simple player who had great tone and the way he locked in with Vinny. Phil is more intricate and is a bit more busy, so if you imagine how Geezer Butler plays with [BLACK] SABBATH, John Entwistle with THE WHO or Noel Redding with [Jimi] Hendrix."

Vivian continued: "He's come up with a lot of ideas for this record. We did it very much like 'Heavy Crown'. Nobody brought complete songs but we all brought ideas and riffs and we worked on them together. I told Phil not to bring complete songs as if we'd done that, it wouldn't have the same organic growth that LAST IN LINE does have. That's how we wrote in DIO too. We didn't bring songs in; we brought in ideas that we bounced off each other and grew the songs from there. It's worked every bit as well with Phil as it did with Jimmy. While Jimmy was more laid back and let the music do the talking, Phil was more A-type [personality]. Phil was more forceful with his ideas and a couple of times I had to pull him to one side and tell him to slow down. He's very quickly found his role in the band and adapted to the way we write. Phil turned out to be an inspired choice. We played with a few bass players before Phil, and one or two were really famous too, but as soon as Phil played, we knew he was the right for the band."

Vivian also talked about the fact that LAST IN LINE doesn't sound like a DIO tribute band, even though the group's initial intent was to celebrate Ronnie James Dio's early work by reuniting the members of the original DIO lineup. After playing shows that featured a setlist composed exclusively of material from the first three DIO albums, the band decided to move forward and create new music in a similar vein.

"If we'd gone with a Ronnie soundalike [for a singer], it would have been tacky and we would have painted ourselves into a corner and there would have been no chance for the band to grow," Vivian explained. "That's another reason why I'm getting excited about this is that we'll have more of a chance to play our original music. We'll still play some of those DIO classics, and it'd be stupid not to, but most of the show will be based around original LAST IN LINE material. But we will always play 'Holy Diver' and the song 'Last In Line'."

He continued: "I remember on the 'Holy Diver' tour with DIO, we were going out and most of the set was made up of RAINBOW and BLACK SABBATH songs. By the second tour, we were able to play more DIO songs, so it became less of a tribute show. We still did a couple of RAINBOW and SABBATH songs, but most of the show was DIO stuff. We're already planning on playing at least two new songs before the album is even released when we start touring in January."

The official music video for the first single from "II", a song called "Landslide", can be seen below.