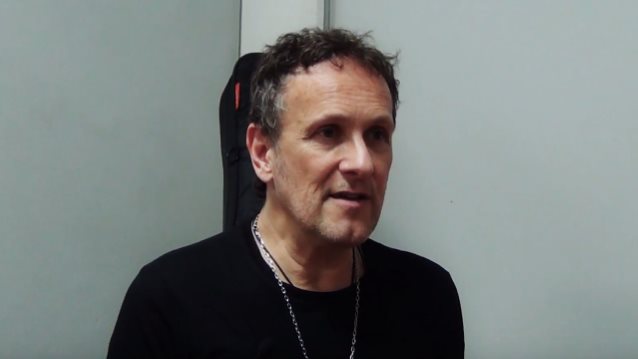 Original DIO guitarist Vivian Campbell says that he has "no real strong opinion" on the hologram of Ronnie James Dio, which made its debut at last year's Wacken Open Air festival in Germany. Created by Eyellusion, the surprise appearance of the heavy metal icon during DIO DISCIPLES' set closed out the massive metal event which was attended by more than seventy-five thousand fans.

Eyellusion recently announced initial dates for "Dio Returns: The World Tour", featuring the Ronnie James Dio hologram reunited with the late rock star's former bandmates from the DIO band. The tour will make more than eighty stops around the globe, kicking off in Helsinki, Finland on November 30.

Asked by TNT Radio Rock for his opinion on the Dio hologram, Campbell said (see video below): "I don't have an opinion. I've never seen it, so I can't say what it's like. But I do think that, in the bigger picture, what we do in LAST IN LINE, and what they do with the hologram, I think it's all mutually to each other's benefit. I think we're all perpetuating, we're all keeping the music alive, and that's a good thing. So I think if the hologram brings more attention to LAST IN LINE, then that's good for LAST IN LINE. If LAST IN LINE playing these songs — Vinny [Appice, drums] and I particular, the originators of the music with Ronnie — if our playing the music brings more attention to the hologram, then that's good for them. So I think it's a win-win. I have no real strong opinion on it. Like I said, I've never seen it, so I can't say."

Campbell, along with Appice and bassist Jimmy Bain, was part of the original DIO lineup, which reunited in 2012 alongside singer Andrew Freeman to form LAST IN LINE.

When LAST IN LINE formed, the intent was to celebrate Ronnie James Dio's early work by reuniting the members of the original DIO lineup. After playing shows that featured a setlist composed exclusively of material from the first three DIO albums, the band decided to move forward and create new music in a similar vein.

The "Dio Returns" tour will also make stops throughout Argentina, Australia, Brazil, Chile, Colombia, Ecuador, France, Germany, Japan, Mexico, New Zealand, Paraguay, United Kingdom, Venezuela and other countries, with dates to be announced. The tour is expected to come to the United States in spring 2018 and play festivals globally during the summer.

The Ronnie James Dio hologram will perform for the majority of the show, treating fans to an alternating set list that will feature songs such as "Holy Diver", "Rainbow In The Dark", "We Rock", "King Of Rock And Roll", BLACK SABBATH's "Neon Knights" and "Heaven And Hell" and RAINBOW's "Man On The Silver Mountain" and more.

Vivian last year slammed DIO DISCIPLES, saying that the band has "zero credibility" as a Ronnie James Dio tribute project despite the fact that it is fully supported by Ronnie's widow/manager, Wendy.

DIO DISCIPLES is billed as a "celebration of the music and legacy of the greatest singer in the world, Ronnie James Dio." The band also notes that "we could NEVER replace Ronnie and that is NOT our intention. There will only ever be one Ronnie James Dio!"

Campbell was fired from DIO in 1986 after a contentious business disagreement with Ronnie James Dio and band management.