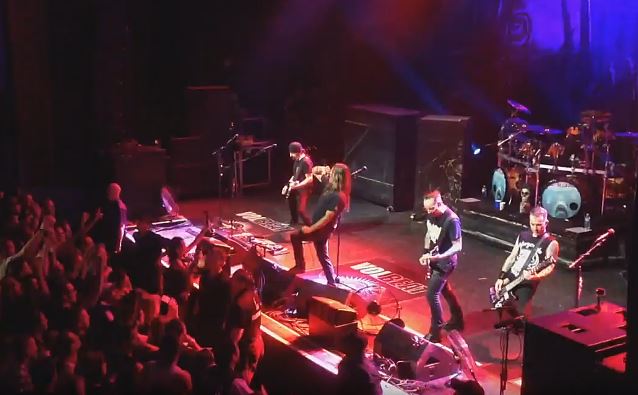 In a 2011 interview with Straight.com, VOLBEAT vocalist/guitarist Michael Poulsen spoke about NAPALM DEATH singer Mark "Barney" Greenway's appearance on the studio version of "Evelyn", which is included on VOLBEAT's fourth album, "Beyond Hell/Above Heaven".

"Writing a song like 'Evelyn' was my way of showing people that it was not only the '50s elements we were inspired by, but we were actually growing up with a lot of great metal bands," Michael said. "And NAPALM DEATH was one of the first extreme metal bands I was listening to — I was listening to them when I bought my first guitar. So being able to have a singer like Barney from NAPALM DEATH on my record was a real accomplishment. It's great to see that it's actually possible for dreams to come true, in a way."

VOLBEAT spent most of the summer in Europe, but returned last month for SEETHER's Rise Above festival in Maine on August 6, the Heavy Montreal event on August 7, and an opening slot for METALLICA at the U.S. Bank Stadium in Minneapolis on August 20.

VOLBEAT is in the middle of a short run of U.S. dates with AVENGED SEVENFOLD, KILLSWITCH ENGAGE and AVATAR.