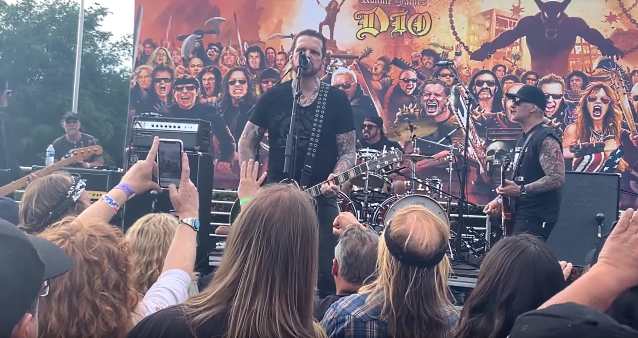 Video footage of Grohl's appearance can be seen below (courtesy of Jessica Chase).

Comprised of a motorcycle ride originating at Harley-Davidson of Glendale and culminating with a concert at Los Encinos Park, the "Ride For Ronnie" raises awareness and funds for cancer prevention and research for a cure. The concert was once again hosted by radio and television personality Eddie Trunk, and a group of stellar rock musicians under the banner of EDDIE TRUNK'S ALL-STAR BAND headlined the afternoon of live music. Last year's "Ride" brought in over $50,000 for the Dio Cancer Fund.

Riders assembled for a continental breakfast at Harley-Davidson of Glendale with kickstands up at 11:00 a.m. The procession traveled around the northern edge of the San Fernando Valley to Los Encinos Park, where they were treated to music, a raffle, silent and live auctions, food trucks and much more.