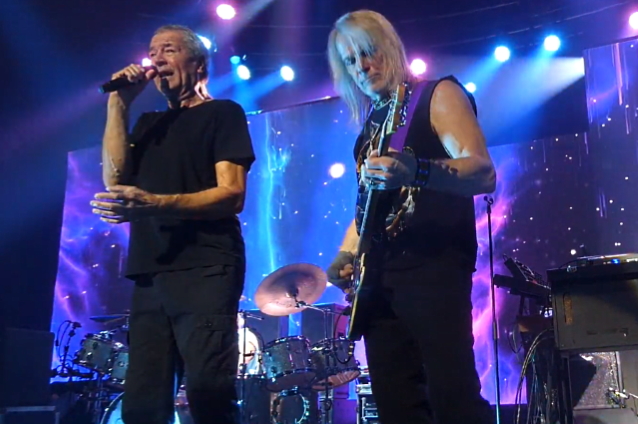 Fan-filmed video footage of DEEP PURPLE's October 2 concert at Warner Theatre in Washington, D.C. can be seen below.

"The Long Goodbye" tour started in May 2017 in Europe and included a North American leg with ALICE COOPER and EDGAR WINTER as well as the aforementioned run with PRIEST.

Two years ago, DEEP PURPLE bassist Roger Glover was asked by Billboard if "The Long Goodbye" tour title was trying to tell fans something. He responded: "Well, we're letting you make your own minds up. No one wants to stop. But we're all about late 60s, early 70s, and bodies have a way of not keeping up with your brain or your career. We're all sort of approaching that point where I can't imagine another eight years to do an album."

Glover continued: "The time is approaching when it will end, but we don't want to face that. We don't actually want to make a date or a final tour or anything. We just want to carry on as long as nature allows or is kind of dignified. If we can't do what we do anymore, then yes, it's time to stop. But we're still doing it, and we're still enjoying it very much. So all we're saying is the door is closing, but it's not closed yet."

DEEP PURPLE's latest album, "InFinite", came out in April 2017 via earMUSIC. The disc was tracked in February 2016 at a studio in Nashville, Tennessee and was once again helmed by Bob Ezrin, who has previously worked with KISS, PINK FLOYD, PETER GABRIEL, ALICE COOPER and KANSAS, among others.

DEEP PURPLE — which has been eligible for induction into the Rock And Roll Hall Of Fame for two decades now — finally entered the Rock Hall as part of the class of 2016. The band's first three lineups were inducted, including drummer Ian Paice, guitarist Ritchie Blackmore, late keyboardist Jon Lord, and various singers and bassists — Rod Evans; Ian Gillan and Roger Glover; and David Coverdale and Glenn Hughes.