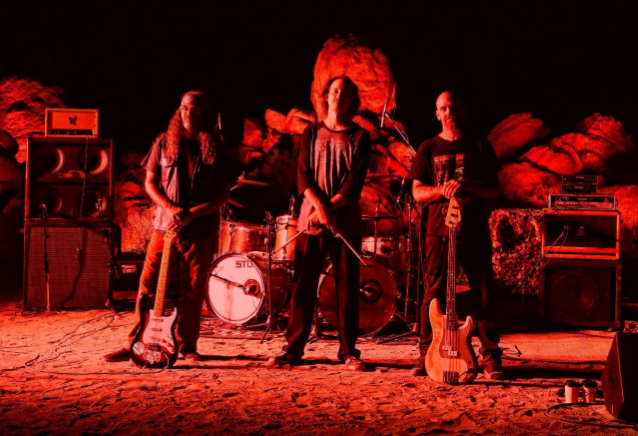 New trio STONER, formed by desert rock and ex-KYUSS legends Brant Bjork and Nick Oliveri, along with Ryan Güt, released a new concert film, "Live In The Mojave Desert: Vol IV", on March 20. A performance clip of the song "Own Yer Blues" can be seen below.

This was the final stream of the "Live In The Mojave Desert" series, deep in the heart of the California wilderness, which included additional performances from EARTHLESS, NEBULA, SPIRIT MOTHER and MOUNTAIN TAMER.

Brant told Outlaws Of The Sun about how STONER came together: "Nick called me up and wanted to jam. So we got together and we were having a blast and this felt right. It was cool all of us playing together. It felt like we were kids starting out again just playing for the fun of it without any outside pressure.

"We all put our musical influences into this via original jam sessions," he added. "This feels like a mixture of punk rock, metal, blues rock and hard rock. Some stuff we're already known for and some stuff that will surprise and hopefully entertain people."

Brant went on to call STONER "a full-time thing. We've got long-term plans for STONER and the music that we create. We're booking tour dates for 2022 onwards in Europe and possibly in the United States. Those plans are in the hands of our booking agents but we've been told the pandemic should be under more control next year and more areas will be open up for live performances to happen."

According to Bjork, "it's been nothing but fun playing with Nick and my drummer Ryan Güt. I wanted to do something different and STONER allowed me the opportunity to do this," he said. "This project feels right for me especially during the pandemic. It feels good vibing new ideas off Nick, who is one of my closest friends and I can't wait to perform these new songs to a live audience. As I feel these songs deserve to be heard by a live audience."

Inspired by PINK FLOYD's "Live At Pompeii 1972" concert documentary film, the "Live In The Mojave Desert" series consisted of five concert streams featuring five albums from five bands as well as including visuals by Mad Alchemy Liquid Light Show filmed and recorded from the natural amphitheater of California's Mojave Desert. Each event lasted two hours which included an hour-long "Couchlock And Rock" session featuring a chat hosted by the California Desert Wizards alongside special guests including bandmembers and icons from the California Desert rock scene. The second hour featured the 1080p HD livestream concert film experience.

"In October 2020, we filmed and recorded five bands in four days, deep in the deep sand and iconic rocks of the desert," said "Live In The Mojave Desert" producer Ryan Jones. "It was a major undertaking to bring this many people and this much gear out to a very remote desert location. Including the bands, we had 25 people onsite daily. With only one road in, everyone and all the gear had to come up a half mile long hill of deep sand — 30 miles from nowhere. We had to hire local desert guys with huge 4x4 pickups to help. The Mad Alchemy Liquid Light Show projected on a four-story high, double pyramid of boulders and we had a crack squad of filmmakers, photographers and recording engineers there to capture it all. It was insane, but it was worth it to see our favorite bands play again."

Each film will be released as a live album, with LP, CD, and DVD pre-orders available via Heavy Psych Sounds.