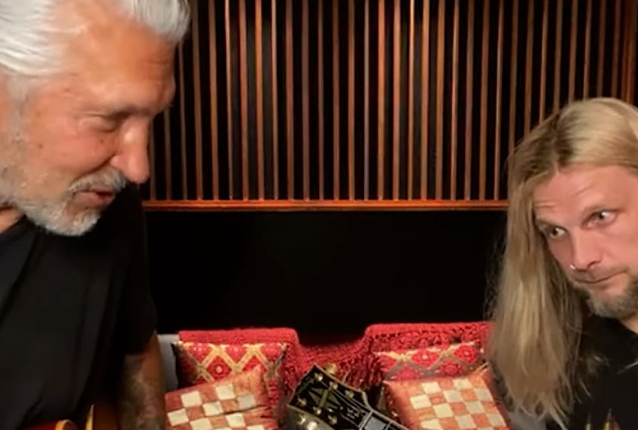 Video of a recent jam between JUDAS PRIEST guitarist Richie Faulkner and DOKKEN's legendary axeman George Lynch, which was originally streamed live on Instagram, can be seen below.

Lynch became a grandfather for the fifth time when his daughter, Mariah Lynch, and Faulkner, who is her boyfriend, welcomed their first child, a baby girl, in July 2020.

Last September, Richie spoke to SiriusXM's "Trunk Nation With Eddie Trunk" about what it's like having George as a member of his family.

"George is a lovely guy; he's like a quiet, humble guy. He's a killer guitar player, as we all know. And he texts Mariah every day: "When can I see my granddaughter?'

"But, yeah, we sat there [and] we played guitar. We talked about guitars. And he's a big PRIEST fan as well; he loves PRIEST. So, yeah, we were talking all night until I put on some Eric Johnson, and then that kind of shut us both up — we didn't wanna play guitar anymore. But he's a lovely guy, man. I think we're gonna see him soon as well."

Richie also jokingly suggested that his daughter will take after him and her grandfather and start shredding the axe.

"It's the next in line of that heritage — George Lynch, LYNCH MOB, DOKKEN, there's JUDAS PRIEST in there, and now we've got a little princess," he said. "So she's the next in line in the gunslingers. EMG pickups, they sent me this beautiful pink flying V for her first guitar. It's absolutely beautiful — bright pink with a little pickup in it. And it actually plays well. So that's her first guitar. So she's well on her way now."

George broke the news of his fifth grandchild's arrival in an Instagram post last July. He shared an adorable photo of Richie bottle-feeding the baby, with Lynch shredding the axe in a chair only several feet away. "New baby time .big chubz>little chubz>micro chubz. the most precious perfect creature in the present universe entered our world July 8th xo", George wrote.

Faulkner joined PRIEST in 2011 as the replacement for original guitarist K.K. Downing.

Richie was once the guitarist in the backing group for Lauren Harris, daughter of IRON MAIDEN bassist Steve Harris.