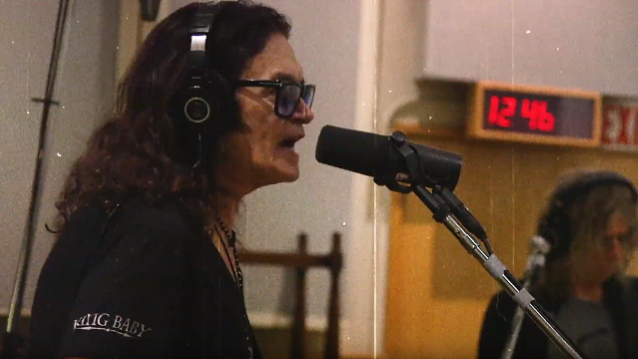 Behind-the-scenes footage from the recording sessions for "Righteous Days", the new single from THE DEAD DAISIES — the hard rock "collective" founded by Australian musician and businessman David Lowy — can be seen below.

A statement on the group's web site elaborated on the lineup change. "THE DEAD DAISIES are a musical collective whose members come together through a common love for great rock music," the post reads. "It's a living, breathing, musical organism with the credo, 'Rock is indeed alive & well!' From the band's inception, the idea was for members to bring their own ideas to the table but also have the flexibility to come and go when working on their other projects. Both John and Marco are, and always will be, a part of THE DEAD DAISIES musical family, but at this point in time they have decided to do some work on their own solo projects."

THE DEAD DAISIES — Lowy, Hughes, guitarist Doug Aldrich (WHITESNAKE, DIO) and drummer Deen Castronovo (JOURNEY, BAD ENGLISH) — recently recorded "Righteous Days" and an undisclosed number of other songs at Los Angeles's Sunset Sound recording studio for a new album expected to be released in 2020. It will serve as the follow-up to the group's fourth full-length release, 2018's "Burn It Down".

According to Wikipedia, since the band's formation in 2012, THE DEAD DAISIES has featured two dozen different members (including "session" players and "temporary substitutes"), including drummer Brian Tichy (FOREIGNER, WHITESNAKE), GUNS N' ROSES guitarist Richard Fortus and GN'R keyboardist Dizzy Reed. The group has toured with the likes of AEROSMITH, KISS and BLACK STAR RIDERS.

Known as the "voice of rock," the 68-year-old Hughes is best known for fronting the Mk. III and Mk. IV lineups of DEEP PURPLE in the mid-1970s and for singing on BLACK SABBATH's 1986 album "Seventh Star". He was replaced by Ray Gillen after only six live performances with the band.