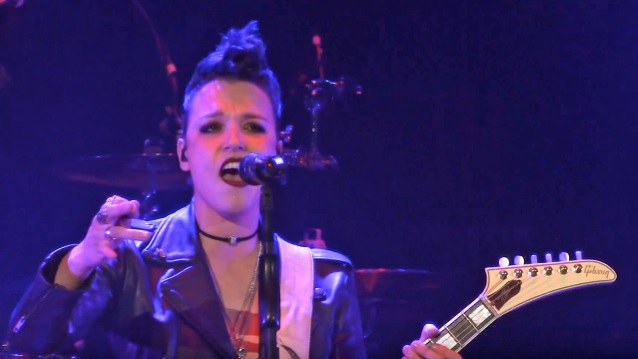 HALESTORM is putting the finishing touches on its fourth album for a tentative mid-2018 release. The disc is being laid down at Dark Horse Recording studios just outside Nashville with Nick Raskulinecz, an acclaimed producer who has previously worked with RUSH, KORN, ALICE IN CHAINS and DEFTONES, in addition to having produced HALESTORM's third covers EP, "ReAniMate 3.0: The CoVeRs eP", which came out in January 2017.

During an appearance on Eddie Trunk's SiriusXM show "Trunk Nation", HALESTORM frontwoman Lzzy Hale said that the band was "almost done" recording the follow-up to 2015's "Into The Wild Life" and that "it sounds awesome."

According to guitarist Joe Hottinger, HALESTORM will spend the next couple of weeks on the road with STONE SOUR before returning to the studio to finish the record. "We only have, like, two weeks left on it — just some vocals and candy stuff," he said.

As for the musical direction of the new HALESTORM material, Joe said: "It rocks. It's the heaviest stuff we've ever done." Lzzy concurred, adding: "We just don't like staying in the same lane, because, as you know, album cycles for rock right now, it's, like, three years is one album cycle, and you're a whole different person than you were in the beginning of it. So it's really hard for us to go back, so we just keep moving forward."

Lzzy believes that the songwriting on the new HALESTORM album is a notch above all of the band's previous efforts, something she attributes to the group finding "our mojo again and just our place. And just sonically, I think it's gonna be the first time that you can actually hear what everybody brings to the table in our band instead of it just being kind of, like, 'Oh, okay, Lzzy sings and there's something going on in the background,'" she said. "Especially considering my little brother [Arejay Hale] as a drummer. Nick is like the drum whisperer. He just loves him, and he's such a drum nerd. He did the last two RUSH records, and he just brought some stuff out of Arejay that we were all in the control room, like, 'How did you get him to do that?' It takes a lot to surprise us with little bro, 'cause we know him so well. He's at a whole other level and he finally has a producer that has the patience and the… I don't know… I wanna say the psychological [laughs]… how to bring that out of him."

"Into The Wild Life" was criticized by some HALESTORM fans for veering too far into pop music territory.