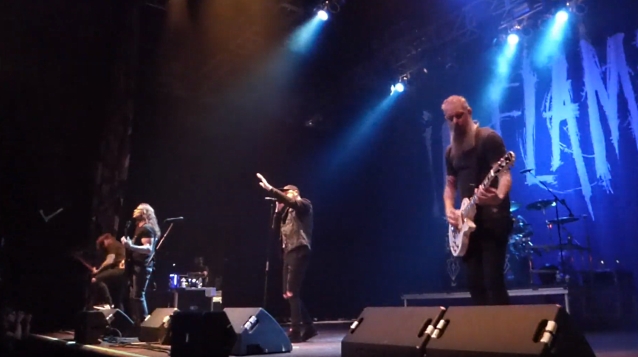 Fan-filmed video footage of IN FLAMES' February 2 concert at the House Of Blues in Houston, Texas can be seen below.

On doctors' orders, guitarist Niclas Engelin is sitting out IN FLAMES' current North American tour and is being temporarily replaced by former MEGADETH and current ACT OF DEFIANCE axeman Chris Broderick.

Prior to the trek's kick-off, IN FLAMES said in a statement: "We're extremely sad to inform that, due to strong medical advisement to stay home, Niclas will not be joining the tour. Luckily, ex-MEGADETH guitarist and longtime friend Chris Broderick was able to step in at the last minute for the full run.

"Please wish Niclas the best as he stays home to rest. We can't wait to see you soon."

IN FLAMES' tour with ALL THAT REMAINS and ALL HAIL THE YETI launched in Houston. A North American run with WITHIN TEMPTATION will start at the end of the month.