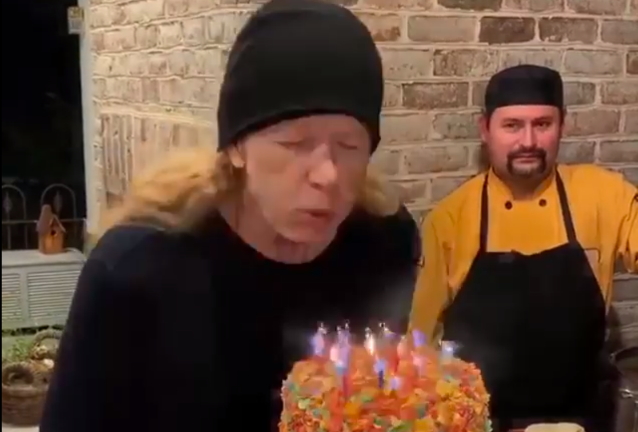 Dave Mustaine celebrated his 59th birthday this past Sunday (September 13) with a family get-together that was topped off by the MEGADETH mainman blowing out candles on a festive cake.

Dave's wife of 29 years, Pamela Mustaine, took to her Instagram to share video of the happy moment, which saw several family members cheering the musician on as he extinguished the dozen or so burning candles.

Mustaine and his family moved to Tennessee in October 2014 after living in Fallbrook, California for many years.

In September 2019, Mustaine put his family's Franklin, Tennessee home on the market for $2.5 million, but removed it in April 2020 as the coronavirus outbreak swelled.

Commenting on MEGADETH's nearly four-decade existence, Mustaine told New Zealand's Stuff in a 2013 interview: "Time flies. 30 years seems like a long time, but boy, it's over so quick. Sometimes I sit back and think how many things have happened over the years, and I guess the thing that makes me feel the best is when I see how many people who'll say, 'We met at a concert,' 'We got engaged at a concert,' 'We got pregnant at a concert,' all these things that they share. These landmarks, these mementoes, they're really cool."

He continued: "I never thought I'd be doing this this long, [MEGADETH bassist] David Ellefson and I; it's crazy. And the fact we can have fun doing what we do, on top of that, just makes it so much more enjoyable."

Mustaine was told he was cancer-free last October, five months after receiving his throat cancer diagnosis.

The MEGADETH guitarist/vocalist revealed his cancer battle in June 2019 on social media, saying the doctors had given him a 90 percent chance of beating the illness. He later said that he underwent 51 radiation treatments and nine chemo treatments before being declared cancer-free.