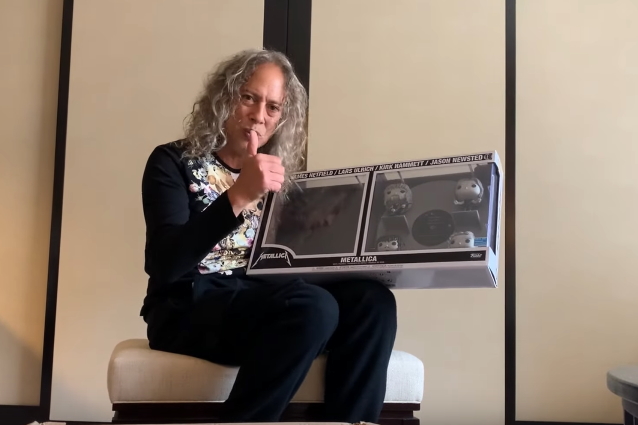 Funko and Walmart have teamed up to get in on the METALLICA "Black Album" celebration with a new-edition "Metallica" Pop! Albums figure. A new one-and-a-half-minute video in which METALLICA guitarist Kirk Hammett unboxes the product can be seen below.

"Hi, this is Kirk from METALLICA," he says at the beginning of the clip. "This wonderful box showed up today from Funko. I wonder what's inside." As he unboxes it, Hammett continues: "How cool is this? It's the new Funko Pop! deluxe album featuring METALLICA's 'Black Album.' How cool is that? Oh wow. They have us as the negatives just like the back of the album. And then they have an actual album in the background but that doesn't look like an album that plays. But how cool is this?"

You can pre-order the "Metallica" Pop! Albums figure now at Walmart.com. It is expected to ship in December.

Funko's Pop! Albums line is features music albums featuring the album itself, using the Pop! figure. The box is oversized and contains a standard Pop! to recreate the primary image on the cover. In addition, the background of the box adds a replica of the album cover to complete the look.

Previous classic LPs which have gotten the Pop! Albums treatment include AC/DC's "Highway To Hell" and MOTÖRHEAD's "Ace Of Spades".

The Black Album is one of the most commercially successful and critically acclaimed records of all time. Its 1991 release not only gave METALLICA its first No. 1 album in no fewer than 10 countries, including a four-week run at No. 1 in the U.S., its unrelenting series of singles — "Enter Sandman", "The Unforgiven", "Nothing Else Matters", "Wherever I May Roam" and "Sad But True" — fueled the band's rise to stadium headlining, radio and MTV dominating household name status. The album's reception from the press was similarly charged, building over the years from the top 10 of the 1991 Village Voice Pazz & Jop national critics poll to becoming a constant presence in the likes of Rolling Stone's 500 Greatest Albums Of All Time. The album's impact and relevance continue to grow — as proven by one indisputable fact: The Black Album remains unchallenged as the best-selling album in the history of Nielsen SoundScan, outselling every release in every genre over the past 30 years.

To commemorate its 30th anniversary, the Grammy-winning, 16-times-platinum-certified Black Album received its definitive re-release on September 10 via the band's own Blackened Recordings.

Funko and Walmart are teaming up to get in on the #BlackAlbum2021 celebration with this new "@OriginalFunko Pop! Deluxe Album: Metallica - The Black Album - @Walmart Exclusive"!