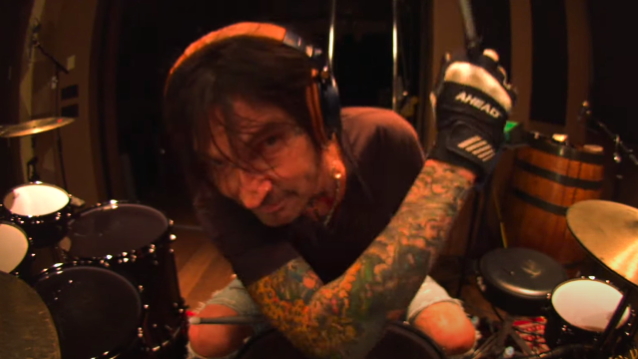 The official music video for Tommy Lee's remix of the song "Tommy Lee" from Tyla Yaweh can be seen below. The track, which also features Post Malone, is said to be an ode to the MÖTLEY CRÜE drummer and his lavish lifestyle.

Tommy told Army & Air Force Exchange Service's Facebook page about his involvement in "Tommy Lee": "They asked me to do a remix [of the song]. I don't know how much you know about remixes, but a lot of times, people will do a remix and you're, like, somebody changed a few beats here and a little bit of this and a little bit of that and called it a remix. Well, this is like a 'redo.' We put on heavy guitars, I smash drums on it, bass, there's some strings… It's crazy. It's like NIRVANA meets GREEN DAY meets THE BEATLES. It sounds like the same song, but it's like the next-level version. It's crazy. I cannot wait for everyone to hear it."

Malone says in the track: "Pull up wit a drum like I'm Tommy Lee/Yaweh got a stick came to rock with me. Living life like a rock star/Pulling up stretch limousines."

In a separate interview with SiriusXM's Debatable, Tommy said that Yaweh and Malone initially recorded the song with "demo drums" and sent it to Lee, who then recorded his contribution at his home studio while in quarantine.

Lee and Post Malone previously collaborated on the song "Over Now", which was featured on the rapper's 2018 album "Beerbongs & Bentleys".

Lee told Debatable about Malone: "I've known him for a while and that dude is a rock star, let me tell you. He's a freaking maniac."

Tyla told NME that "Tommy Lee" is about "living life and spreading positive energy." Explaining why he and Malone named the track after the MÖTLEY CRÜE drummer, he added: "Tommy Lee just doesn't give a fuck and I love that."

Last month, Lee released two new solo songs. "Knock Me Down" is a collaboration with Killvein, while "Tops" features South African rapper Push Push. Both tracks will appear on Tommy's new solo album, "Andro", which is due in October.