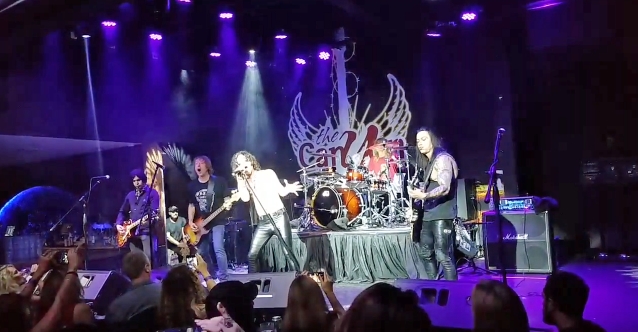 The new lineup of ADLER'S APPETITE was joined by former DOKKEN and current FOREIGNER bassist Jeff Pilson for a performance of the GUNS N' ROSES classic "Sweet Child O' Mine" on August 25 at The Canyon in Santa Clarita, California. Video footage of his appearance can be seen below.

Kamin replaced Constantine Maroulis of "American Idol" and "Rock Of Ages" fame, who was the vocalist for ADLER'S APPETITE for a dozen or so dates this past May, including an Australian tour.

Steven previously played with Ariel when the drummer joined SON OF GUN on stage in November 2016 in Buenos Aires, Argentina to perform several GN'R classics, including "You Could Be Mine" and "Welcome To The Jungle".

Back in April, when Constantine was first announced as the new frontman of ADLER'S APPETITE, Steven said: "GUNS N' ROSES are the biggest rock band in the fuckin' world now, and since the guys don't want me to play with them and I love these songs and I'm so proud of them ... now I finally have a singer who can compete with the young Axl Rose."