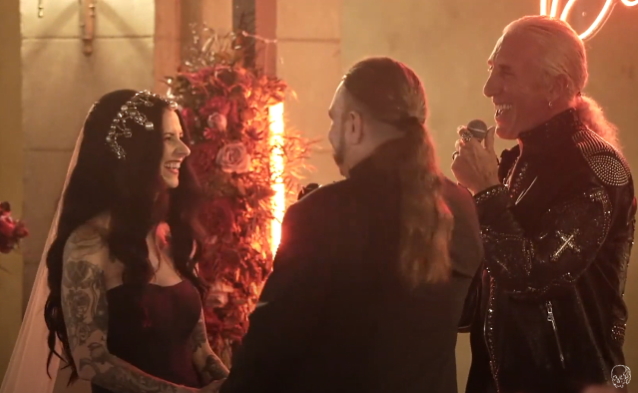 Mr. Rust, the founding member, bassist and co-vocalist of the Los Angeles-based heavy metal trio RUSTY EYE, was recently able to meet one of his musical heroes, TWISTED SISTER vocalist/songwriter Dee Snider, in a unique situation. Mr. Rust and his now-wife Teresa Gallo enlisted Snider to officiate their November 6 wedding ceremony held at the Hollywood Roosevelt Hotel in Hollywood, California. The couple have shared a video of the ceremony featuring a soundtrack of songs from RUSTY EYE's latest album, 2020's "Dissecting Shadows". Check it out below.

"TWISTED SISTER has always been an influence for me and RUSTY EYE," said Mr. Rust. "When I was six years old, someone gave me the remixed version of 'Under The Blade' on vinyl, and since then, TWISTED SISTER has been one of my favorite bands. Dee's eloquence and showmanship has made him into a larger-than-life icon that can command a crowd and guarantees a good show.

"Teresa and I are metal and horror fans, and that made Dee Snider the perfect officiant to marry us," he continued. "He has also officiated weddings for Twiggy Ramirez, Adam Green and his son Jesse Blaze Snider, all whom are already divorced… but he says he's a got a good feeling about us as he believes in marriage and shortly before our wedding, he had celebrated his 40th wedding anniversary."

Back in 2016, Snider, who had at that point just celebrated his 35th wedding anniversary, spoke about how he and his wife, Suzette, have made their marriage work, even as Dee traveled the world as the frontman for one of the most successful bands of the glam-metal era.

He continued: "One thing I can say… When we went to therapy — and we've been to therapy; I nearly blew it a few times — the therapist said, 'The only difference between couples who get divorced and the couples who stay together [is] the couples that stay together refuse to accept divorce as an option.' That's the only difference. It's not the problems they have; everybody goes through the same stuff or does the same mistakes or stumbles or falls, but the couple that stays says, 'We're not getting divorced, so let's figure this out.' So there's that, and that plays a really big part. And the other part is just knowing it's a work in progress. And if you think it's just you said it and forget it — no. Life is constantly changing, things happen…"

Snider added: "Look, falls from grace… Success? My success, which nearly destroyed us, because I became so full of myself, I didn't wanna hear anybody tell me 'no,' and Suzette is not a 'yes' girl. She's a tough Brooklyn chick; she's never been a 'yes' girl. And at some point, I didn't wanna hear anybody saying anything to me but 'yes.' So I nearly destroyed it then. But we made it through. I got knocked down, and we kept it together. At one point in her life, her brother was murdered, and let me tell you, that was devastating in her life, and that was one of those points where you sit there and go, 'Well, for better or for worse… And I've gotta hang on through this,' because you don't just walk away when things get a little crazy and a little tough, because a depression and a half set in after that. So it's a work in progress."

During an appearance on the Oprah Winfrey Network, Suzette gave her opinion about why her relationship with Dee has lasted this long. She said: "I believe the key to a successful marriage, or relationship in general, is to always view it as the first or second or third date, when things were exciting and new and you literally fantasized about meeting, seeing each other, the butterflies in your stomach. I think that's the way you keep it alive. And I always fantasize if I was his mistress or girlfriend, what would I do? What would I have done [40] years ago?"