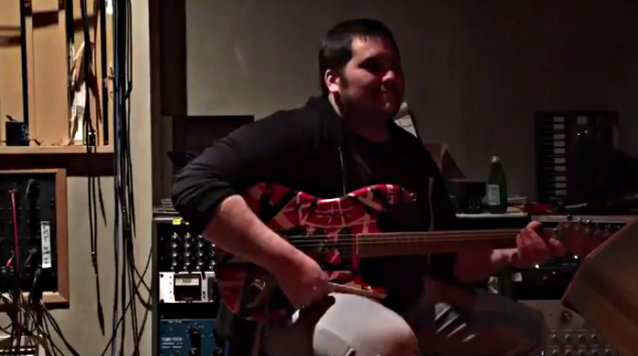 Wolfgang Van Halen commemorated the fortieth anniversary of the recording of his father's classic instrumental "Eruption" by posting a video of the VAN HALEN bassist playing the song on the original guitar it was tracked with. Check out the clip below.

Wolfgang is currently working on his debut solo album, tentatively due next year. The disc reportedly features the VAN HALEN bassist playing all the drums, bass, guitars and keyboards himself, in addition to handling all the vocal tracks. Van Halen News Desk spoke directly with a pair of people who had heard portions of the record, saying they "totally loved it."

Eddie Van Halen described the project in 2015 as sounding like "AC/DC meets VAN HALEN meets aggressive pop," adding, "It's a little of everything and sounds like a freight train coming at you. I've never heard anything quite like it. It's so powerful that I'm jealous."

In honor of Eruption being recorded 40 years ago today, here's me playing it on the guitar it was recorded on. #Eruption #EddieVanHalen pic.twitter.com/X1JV5zOzUJ