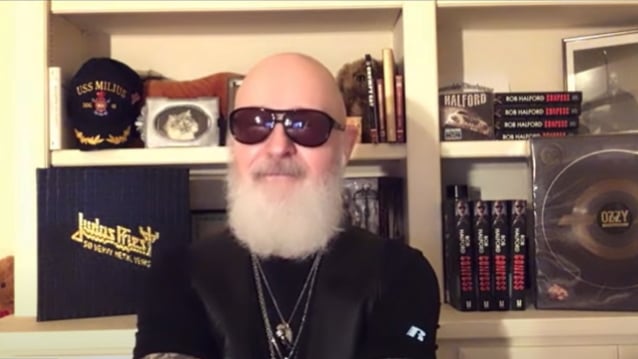 In a brand new interview with Brazil's "Inside With Paulo Baron", JUDAS PRIEST singer Rob Halford was asked why the band's founding guitarist K.K. Downing decided to exit the group a decade ago. He responded (as transcribed by BLABBERMOUTH.NET): "Well, I'm not gonna talk too much about this subject because it's what we call a 'hop topic.' But I think K.K. spoke for himself. K.K. wanted to retire and he wanted to do other things. Again, I can only reinforce that we give him our best and give him great wishes and good luck with everything that he's doing now. And that's it for me.

Last year, Downing announced the formation of KK'S PRIEST, in which he is joined by fellow former PRIEST members Les Binks (drums) and Tim "Ripper" Owens (vocals). The band, which pays homage to Downing's past, is rounded out by guitarist A.J. Mills (HOSTILE) and bassist Tony Newton (VOODOO SIX).

In 2019, Halford didn't rule out Downing's reunion with PRIEST, saying "what will happen will happen." But bassist Ian Hill has said that there are no plans for PRIEST to invite Downing to return to the band. "Richie took over from Ken," Hill told Riff Magazine. "He's done an absolutely tremendous job, he really has. And he's made Ken's parts his own now. He's got his own angle on the lead breaks. Ken's part's been taken, and there's no plans to have Ken back, really. Hey, listen, never say never. But at the moment, we're going along quite well without Ken, so it could stay like that, I think, at least for the foreseeable future."

In 2018, Downing dismissed as a "load of bollocks" Hill's explanation for why K.K. wasn't invited to rejoin the band after fellow guitarist Glenn Tipton's Parkinson's diagnosis was made public. "We were like brothers; we went to infant school together and secondary school together, and we lived our career together," Downing said. "But I'm not totally happy about what's being said. Ian seems to be [saying] things like, 'None of the fans are missing K.K.,' and, 'Richie has brought a new energy to the band.' And I'm going, 'Ian, dude, on that last tour, I was the energy. I slowed down because people weren't keeping up with me.'… So I'm thinking, Ian, get a grip with yourself, mate. You've just replaced the energy with some energy. Fine — well, great. But that's not moving forward, Ian."

Tipton was diagnosed with Parkinson's disease seven years ago — after being stricken by the condition at least half a decade earlier — but announced in February 2018 he was going to sit out touring activities in support of PRIEST's latest album, "Firepower".

Three years ago, Downing revealed that he sent two resignation letters to his bandmates when he decided to quit JUDAS PRIEST. The first was described as "a graceful exit note, implying a smooth retirement from music," while the second was "angrier, laying out all of his frustrations with specific parties." Downing later said that he believed the second letter was "a key reason" he wasn't invited to rejoin PRIEST after Tipton's decision to retire from touring.

Halford's autobiography, "Confess", was released in September via Hachette Books. It was written with Ian Gittins, co-writer of "The Heroin Diaries" by Nikki Sixx.