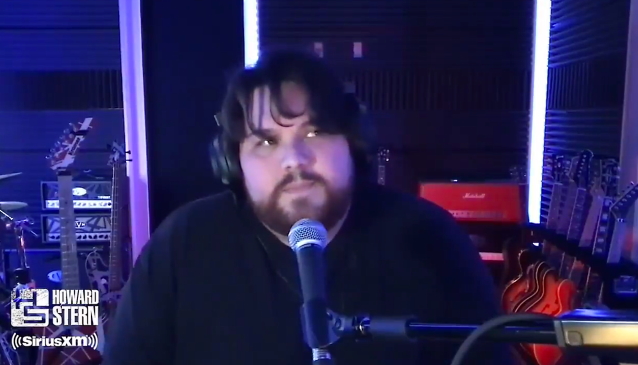 Wolfgang Van Halen has once again shot down a rumor that a new version of VAN HALEN is being assembled featuring him on guitar in place of his late father.

Late last month, a rumor started to make the rounds via a Wolfgang Van Halen private group on Facebook that the VAN HALEN "camp" was discussing the possibility of the band carrying with a revamped lineup that would consist of Sammy Hagar on vocals, Michael Anthony on bass, Alex Van Halen on drums and Wolfgang on guitar. Furthermore, it was suggested that Eddie Van Halen told his son and brother "I give you my blessing" with regard to the prospect of VAN HALEN continuing without him.

During an appearance earlier today (Monday, November 16) on SiriusXM's "The Howard Stern Show", Wolfgang addressed the rumor saying: "That's fucking stupid. You can't have VAN HALEN without Eddie Van Halen. I'm not my dad. I'm not going to replace him. I've spent my life making sure I'm not like him; I'm my own person. My dad, he'd be pissed off. He'd be, like, 'What the fuck are you doing? Go do your own shit.'"

According to Wolfgang, the rumors of a VAN HALEN reunion were started by "desperate fans — which I understand. They wanna see the music continue," he said. "But some things just suck, and this is one of those things.

"I don't have a dad anymore, and I'm coming to terms with that; I'm trying to figure out how to deal with that," Wolfgang added. "So I think the fans can try and come to terms with and figure out how to deal with the fact that we're not gonna have VAN HALEN anymore. The music is gonna live on forever, but you can't continue without Eddie Van Halen."

Sammy, Eddie, Alex and Michael last teamed up in 2004 for a U.S. summer tour. In exchange for taking part in the tour, Anthony reportedly had to agree to take a pay cut and sign away his rights to the band name and logo.

Early last year, rumors were rampant that the classic-era lineup of VAN HALEN would reunite for the first time since 1984. It has since been revealed that a health setback involving Eddie was responsible for the tour not materializing.

Wolfgang has just released "Distance", the first music from his solo band MAMMOTH WVH. A full-length album will arrive in 2021 via Explorer1 Music Group/EX1 Records.