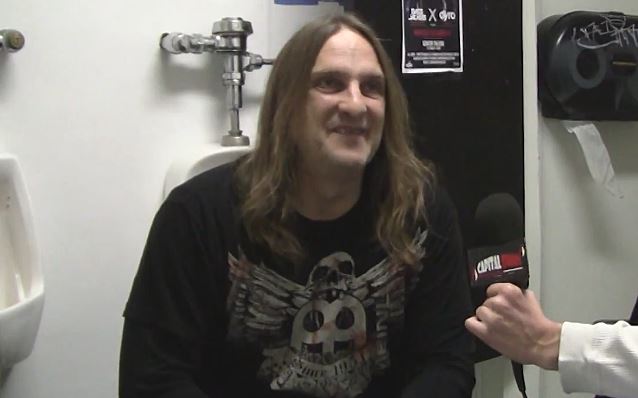 On December 13, 2014, Jimmy McCarthy of Capital Chaos TV conducted an interview with drummer Tom Hunting of San Francisco Bay Area thrashers EXODUS. You can now watch the chat below.

Asked if he would consider leaving EXODUS to join MEGADETH as the replacement for the recently departed Shawn Drover, Hunting said: "If [MEGADETH mainman Dave Mustaine] called and wanted to do some work, I would certainly listen or whatever. But I believe in my own band and what we're doing right now.

"I've never been one of those guys that floats around between bands. I wanna do what I do with EXODUS and have a normal life. I wanna do normal things, like chop wood and have a wife, and… you know what I mean?! Spend time with my family, and shit like that.

"I wouldn't wanna really jump from band to band or whatever, but if he needed a drummer for recording and I was available, I would certainly entertain the idea."

He continued: "Our band is a different kind of camp. Our band is, it's a brotherhood, and we really love and respect each other. It's different than other bands that are out there that are just kind of, like, guys that work together — you know what I mean?! — that don't necessarily get along with each other or whatever. And I'm not saying MEGADETH doesn't get along with each other, but I really like the vibe of our band. So to jump ship on that, I don't think I would do it. It's not worth an amount of money or whatever. I've been with this cause for too long now."

"Blood In Blood Out", the video for the title track of the new album from San Francisco Bay Area thrash metal veterans EXODUS, can be seen below. The clip was directed by Shan Dan Horan of the Shadow Born Group (BUCKCHERRY, CARNIFEX, WINDS OF PLAGUE) and it features hundreds of dedicated Bay Area fans that came out in droves to perform as extras in the video after a wide casting call.

"'Blood In Blood Out' was exactly the kind of video we wanted and needed to make… unbridled energy, violence, blood and our Bay Area friends and family at the center of attention! Just as they should be," states EXODUS guitarist Gary Holt.

"I hate making videos and this one was so much fun, I actually caught myself saying things I never would say before! 'Let's run through it again!'"

EXODUS's latest album, "Blood In Blood Out", sold around 8,800 copies in the United States in its first week of release to debut at position No. 38 on The Billboard 200 chart. Released in North America on October 14, 2014 via Nuclear Blast, the CD art was illustrated by Swedish artist Pär Olofsson, known worldwide for his incredible renderings that have graced the covers of countless heavy metal albums, including EXODUS' "Let There Be Blood".

"Blood In Blood Out" is EXODUS' first album since the departure of the band's lead singer of the past nine years, Rob Dukes, and the return of his predecessor, Steve "Zetro" Souza, who previously fronted EXODUS from 1986 to 1993 and from 2002 to 2004.