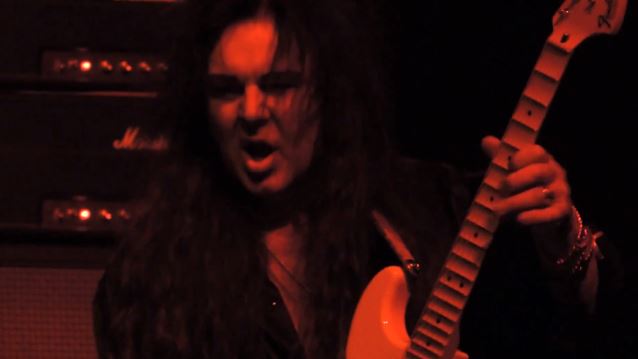 On December 5, 2014, Mal of Adelaide, Australia's 3D Radio conducted an interview with legendary Swedish guitarist Yngwie Malmsteen. You can now listen to the chat in the YouTube clip below.

Speaking about the recording process for his most recent albums, Yngwie said: "Well, it's changed somewhat because… I'm actually calling you… I'm inside my recording studio now. And it's in my house. And it's not like a home studio; it's a full-blown studio. And it's in here. And I go in here and I see what happens. If I like what I hear, then I use it. If I don't like it, I don't use it. And in the past, I used to do demos. I would do demos, and rehearse it with the band and you rent the studio and go in and record it and so forth. It was a very different process because by the time it was actually recorded, it had gone through so many stages that the spontaneity was gone. Now, it's here now; it's here now. And it's a lovely thing."

He continued: "I'm in the studio making another album right now. Right now, as we apeak, I'm actually working on a new record. And it's not, like, 'Okay, now I'm gonna go in and do it.' No. it's just that when I'm inspired, I go in and I do something. If I'm not inspired, I don't; I do other things. And that was another thing which, in the past, you had to do [things within a certain] time [period]; the clock was running, and it was terrible, [and] I didn't like it. Now I just do [it] when I feel like it, and before I would have to do it when it was, like… Also, it was a cycle back then where you did a tour, an album, tour, album… Now I tour and I record and I tour and record… Mix and match… It doesn't have a schedule like it used to."

Asked if he is making the new album himself or if he's got other people assisting him, Yngwie said: "Well, it depends how you mean. I write everything. I'm thinking about bringing… I have this guy that sang on my last live album [Nick Marino] — he's also a keyboard player — I might bring him in for a couple of songs. I'm still working on things, so I haven't made my mind up on [anything] yet. Whatever feels right at the time , that's what I'll do. I don't plan it out before it's done. It kind of takes on its own life, you know what I mean?! So I would say it's rather early in the process, the album. It's not like towards the end."

The CD and DVD, both of which are named after Malmsteen's latest studio album, 2012's "Spellbound", were issued on September 17, 2014.